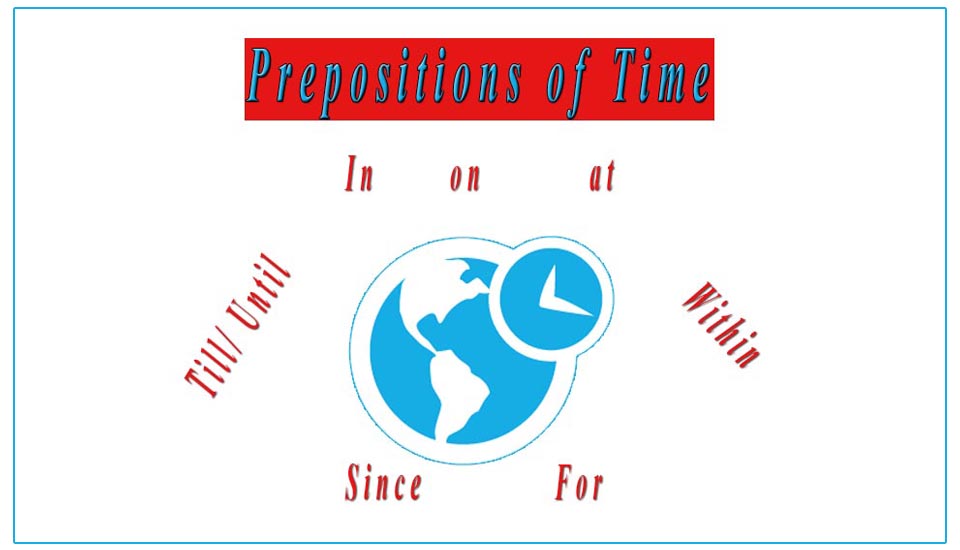 Prepositions of Time
1. The preposition (On)
Days of week (Sunday, Friday etc.)
• The center will remain open on Sunday.
• On Friday morning.

Weekend (American English)
• We will go camping on the weekend.

Decades/ centuries
• In the sixties
• We are living in the 21st century.

General times of day: Morning/ evening/ afternoon
• I have a computer class in the afternoon.

Period of time
• You will master your English in three years.
• The match will be started in a few minutes.
• I didn’t know about prepositions of time in the past.

3. The preposition (At)
Night
• They are having a party at night.

Weekend (British English)
• I will hang out with my friends at the weekend.

For exact or a particular time
The classes begin at 4: 30 this afternoon.

With expressions (at Christmas/ at the moment/ at present/ at the same time/ at the age of)
• We are talking about prepositions of time at the moment.
• My father will bring a present at Christmas.

4. The preposition (Since)
From a certain point of time till now (past till now)
• I have been teaching English at this academy since 2015.

5. The preposition (For)
For a period of time expressing duration
• For six years.
• For two weeks.
• For three hours.

6. The preposition (Ago)
A certain time in the past / back in time from the present
• Australia were the champions in world T20 four years ago.

7. The preposition (Before)
Earlier than a certain point of time
• Before 2015.
• What would you do before noon?

8. The prepositions (Till/ Until)
• I was working till 12 PM.
• The match is delayed until the rain stops.

10. The preposition (By)
Not later than, at or before
• We will reach there by three o’clock.
• By Thursday.

12. The preposition (Within)
During a period of time
• Within a day.

This is very helpful in learning the language