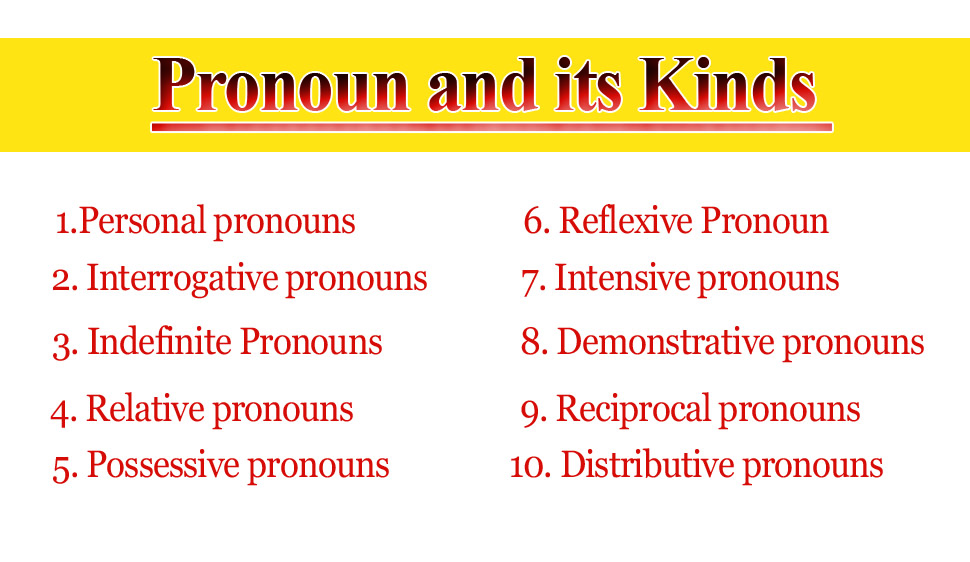 10 Kinds of Pronouns in English

Pronouns are the major part of a sentence as like a verb. It plays a vital role in a sentence, almost in every sentence you use a pronoun, therefore using pronouns correctly in your sentences is very important. In this article, we will review 10 kinds of Pronouns in English.

10 Kinds of Pronouns in English

A personal pronoun refers to the person speaking, the person being spoken to, or the person or thing being spoken about.
Personal pronouns are divided into two groups: subjective and objective.
Subjective pronoun: A pronoun which acts as the subject in the sentence (he, she, it, I, we, you, they).
Objective pronoun: A pronoun that acts as the object in the sentence (him, her, it, me, us, you, them).

Indefinite pronouns are those pronouns that refer to an unspecified person, place, thing, or idea.
(all, anyone, both, each, anything, everybody, many, no one, some, someone, etc….)

Note: Remember do not mix relative pronouns with relative adjectives.

The adjective has a noun referent someplace (usually after it.) There are only two relative adjectives, which and what.

These pronouns are used only to place emphasis on the subject.
Note: These pronouns look the same as reflexive pronouns, but they act differently in the sentence and are always placed next to the subject that they are emphasizing. (Myself, yourself, himself, herself, itself, ourselves, themselves).

A demonstrative pronoun is a pronoun that is used to point to something specific within a sentence.
These pronouns can indicate items in space or time, and they can be either singular or plural. (this, that, these, those, none, neither and such)

How to Use Demonstrative Pronouns?
Demonstrative pronouns always identify nouns, whether those nouns are named specifically or not.

Reciprocal pronouns are pronouns that are used to refer to a mutual set of people.
(Each other, each other’s, one another, one another’s).

Distributive pronouns are those pronouns that point to persons, places, or things one at a time.
(Each, either and neither)

Note: A distributive pronoun is always singular and as such, it should be followed by a singular noun and verb.

Was the article helpful? If it was helpful, you can support us on a monthly basis on Patrons from $5/month up get access to our writing Corner, a more personal writing space than our blog, or in a one-time gift through PayPal at [email protected]

How to Use Who and Whom in Your Sentences?

Advisability and Desirability in English

Difference Between Sometimes and Sometime

Thanks for your sharing!
I wonder 2 questions could you please help me.
1. Can a pronoun be an attribute? Could you give me examples?
2. There are 10 types of pronouns so what about quantitative pronouns. Is it in list of pronouns’ types?thanks

You are Welcome!
1.A pronoun doesn’t show the characteristic of person or thing. If it shows then it can be attribute.
2. Quantitative pronouns can come in the class of indefinite pronouns.

What about there? What type of pronoun is it?

Sorry Roger Njebuh, What exactly your question is?

He may be asking about introductory ‘there’ as in – There are three mangoes there.

I mean: the word “there” is a pronoun which falls under what category: I don’t see how it can be a personal, a subject, a disrrbutive pronoun. What is it called?

“There” just as “it” is a expletive pronoun; they function grammatically as pronouns but do not have antecedents nd refer to nothing peculiar. For instance, “there” are many tourist sites in Ghana.

Thanks Derrick for your clarification but permit me observe it rather creates a new type of pronoun – expletive. If we remember our determiner lesson, we observed there is a zero article added to the definite and indefinit article classification. Are suggesting no such exists for the pronoun – zero antecedent pronoun or expletive?

Amazing definations. And what about impersonal pronoun.isn’t types of prononu??

What about there?what kind of pronoun is these?

Your English is perfect.