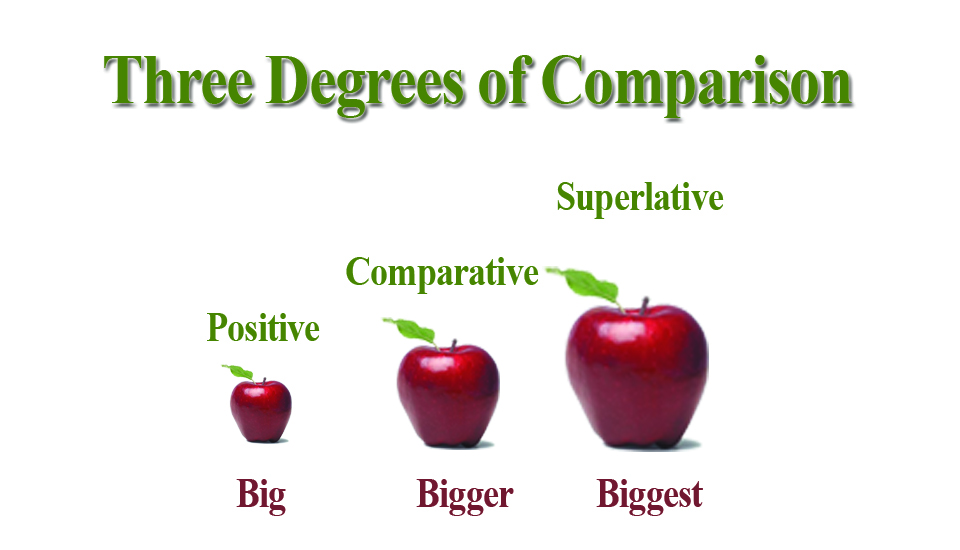 Three Degrees of Adjectives in English

1. The Positive Degree
The positive degree of an adjective makes no comparison.

3. The Superlative Degree
The superlative degree compares a person, thing, activity, or quality with the group.

Rules for making comparatives and superlatives

2. If the one-syllable adjective ends with an –e, just add –r for the comparative form and –st for the superlative form.

3. Two-syllable adjectives ending in –er, -le, or –ow take –er for the comparative form and –est to for the superlative form.

Exceptions:
Some adjectives have irregular comparative and superlative forms.

Note: Two-syllable adjectives that follow two rules. These adjectives can be used with -er and -est and with more and most.

3. Make sure that the items being compared are truly comparable. If not, reword as necessary.

When you learned about three degrees of adjectives then attempt the exercises of this lesson.

Now you are an expert in using adjectives and creating interesting comparisons. Write your feedback down about three degrees of adjectives. Otherwise, if you don’t have any time for English essay writing, don’t lose your chance to try SmartWritingService, an essay writing service you can fully rely upon.

Why is the “First Degree” of adjectives called “positive”, when they can be very negative? “bad”, “awful” etc. These should just be called descriptive adjectives. It should be Descriptive, Comparative and Superlative!

Thank you Khalil Saher for appreciation.

You have not told about adjectives ending in -ior like superior, inferior, junior, senior; that they do not take ‘than’ but ‘to’ after them.

Thanks for the idea Rizwan.