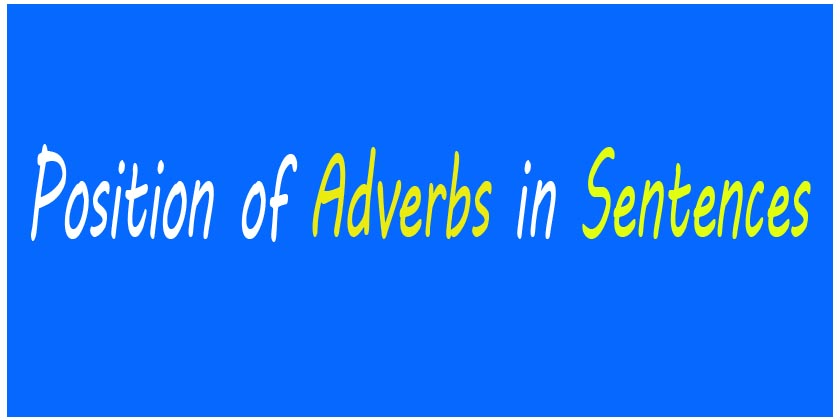 The following rules show the position of adverbs in sentences. learn abut them and use adverb in your sentences accurately, but initially we look at adverb.

Adverb: An adverb is a word that modifies a verb, an adjective and another adverb.

Adverb at the beginning of sentences.

Adverb in the middle of a sentences.

Adverb at the end of a sentence.

2. Position of adverb in different tenses

You had previously studied English before you moved to New York.

They have just gone outside.

She has only been working here since 2015.

End-position
When adverb of manner is used at the end of sentences it gives more emphasis.

Adverbs of manner not ending in -ly (like well, hard, and fast) can only appear in the end position:

Adverbs of time and frequency

We take three times meal daily.
Let’s have test weekly to keep the students on their toes.

Indefinite frequency:
Words like: often, usually, frequently, occasionally, sometimes, rarely, always, never, finally, eventually, soon.
These adverbs can be used in various positions in a sentence, except always and never, they go in the mid-position, before the verb.

The others can be used in various positions.

Note: Adverb can not be used between the verb and its object.

Adverb of place
Adverbs of place usually come in mid- position or end-position.

Maybe it will rain today.
Perhaps we should go early.

Other adverb of certainly go in the mid-position.

Connecting adverbs show the relationship between events or ideas: Ex) however, anyway, then, next, similarly, additionally, furthermore, otherwise.

Both of these adverbs are usually used in the front position.

Emphasizing adverbs
The words like: very, really, extremely, terribly, quite, pretty, almost etc.
These words usually go in the mid-position, immediately before the word that they emphasize.

Gerunds and Infinitives Exercise With Answers

Thanks you. It is awesome article

You are welcome Vasilii dear.