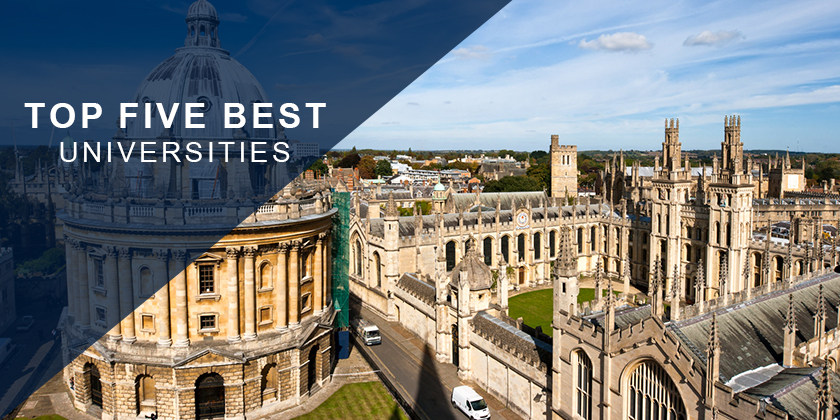 Have you ever wondered, where do the best students of the world come from? How are they prepared and how do they achieve the most incredible tasks of the world? Well, there are piles of answers and reasons which you can find worthy enough to read. I have selected Top Five Best Universities in the World 2022  that can help you figure out why do these universities rank higher and have great tiers.

The Massachusetts Institute of Technology (MIT) is an independent, coeducational, private research university based in the city of Cambridge, Massachusetts with a motto Mens et Manus, which translates as “Mind and Hand”.

It is home to around 1,000 faculty members and over 11,000 undergraduate and graduate students. MIT’s current areas of research include digital learning, energy, Big Data, human health and much more.

MIT estimates that all its living alumni have between them launched more than 30,000 active companies, created 4.6 million jobs and generated roughly $1.9 trillion in annual revenue.

Taken together, this ‘MIT Nation’ is same, they say, to the 10th largest economy in the world.

What is The Massachusetts Institute of Technology (MIT) best known for?

While MIT is perhaps best known for its programs in engineering and the physical sciences, other areas; notably economics, political science, urban studies, linguistics, and philosophy are also strong. Admission is extremely competitive, and undergraduate students are often able to follow their own original research. However, these are the reasons that Massachusetts Institute of Technology (MIT) has made its first place in our, “Top Five Best Universities in the World 2022″ classification.

Stanford University is located in the heart of Silicon Valley. It was found in 1885 by Jane and Leland Stanford, to promote the public welfare by exercising an authority on behalf of humanity and civilization.

Situated on 8,180 acres, Stanford is one of the largest campuses in the United States with 18 integrate research institutes and seven schools on a single campus: Graduate School of Business.

Stanford is also an athletics powerhouse, with 900 current student-athletes with a history of 137 national championships. And 23 consecutive Directors’ Cups, awarded to the top intercollegiate athletics program in the nation. It also counts 19 Nobel laureates within its community today and numerous other alumni,  with the worlds of art, social sciences, business, politics, humanities, media, sports, and technology. The alumni include 17 astronauts, 18 Turing Award recipients and two Fields Medalists.

What is Stanford University best known for?

Stanford University is one of the world’s leading research universities. It is known for its entrepreneurial character, drawn from the legacy of its founders, Jane and Leland Stanford, and its relationship to Silicon Valley.

Back in 1636, Harvard University is the oldest university in the US and is regarded as one of the most prestigious in the world. It was named after its first benefactor, John Harvard, who left his library and half his estate to the institution when he died in 1638.

There are more than 400 student organizations on campus, and Harvard’s medical school is connected to 10 hospitals.

The university receives one of the largest financial endowments of any higher education institution in the world; it created $1.5 billion in the fiscal year ended June 2013 – more than a third of Harvard’s total operating revenue in that year.

What is Harvard University best known for?

Harvard University is a private institution that was founded in 1636. It has a total undergraduate enrollment of 6,710, its setting is urban, and the campus size is 5,076 acres. It utilizes a semester-based academic calendar. Harvard University’s ranking in the 2021 edition of Best Colleges is National Universities, 3.

The University of Cambridge was founded in 1209; is a collegiate public research institution. Its 800-year history makes it the fourth-oldest surviving university in the world and the second-oldest university in the English-speaking world.

The campus is located in the center of the city of Cambridge, with its numerous listed buildings and many of the older colleges situated on or near the river Cam.

The university is home to over 100 libraries, which, between them, hold more than 15 million books in total. In the main Cambridge University library alone, which is a legal depository, there are eight million holdings. The university also owns nine arts, scientific and cultural museums that are open to the public throughout the year, as well as a botanical garden.

In total, 92 affiliates of the university have been awarded Nobel Prizes, covering every category.

The university’s endowment is valued at nearly £6 billion.

The University of Oxford is the oldest university in the English-speaking world and the world’s second oldest surviving university.

Students number around 22,000 in total. Over half of whom are undergraduates while, over 40 percent are international, representing 140 countries between them.

Called the ‘city of dreaming spires’ by Victorian poet, Oxford has an alumni network of over 250,000 individuals, including more than 120 Olympic medalists, 26 Nobel Prize winners, seven poets laureate, and over 30 modern world leaders.

Oxford’s first international student, named Emo of Friesland, was enrolled in 1190, while the modern-day university prides itself on having an ‘international character’ with connections to almost every country in the world and 40% of its faculty drawn from overseas.

As a modern, research-driven university, Oxford has numerous strengths but cites particular prowess in the sciences, having recently ranked number one in the world for medicine and among the top ten universities globally for life sciences, physical sciences, social sciences, and the arts and humanities.

What is Harvard University best known for?

The 30 Most Famous Oxford Students of All Time. The prestigious Oxford University has been teaching students since 1096 and it’s produced some of the greatest minds and successful people in the world. You may have seen the famous alumni from Yale, Harvard, Stanford, and Princeton. This year, the University of Oxford couldn’t make it to Top Three Best Universities in the World which it may eventually surpass this the year ahead.

What do you think?

Do you agree with the list, “Top Five Best Universities in the World 2022”? If you do, please let us know your thoughts in the comment section below.