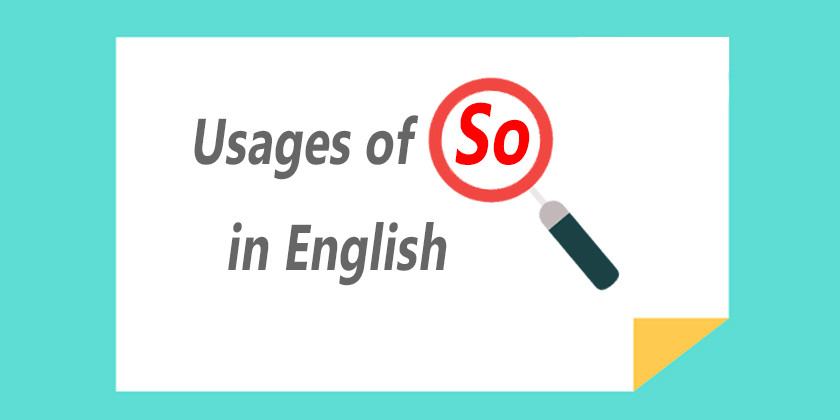 Usages of So in English Grammar

Sometimes using the easiest and simple words can be confusing and for ESL learners. As an illustration, ‘its, it’s, so’ etc. One of the most common and short words which has a lot of meanings and usages is ‘So’. The word ‘So’ is used a lot meanwhile speaking. Therefore, it’s important to know the usages of it. Scroll down and learn about the usages of so.

So can be used in the following ways:

1. As an adverb (followed by an adjective or another adverb):

3. (Followed by an auxiliary or modal verb and then its subject):

4. (Followed by an adjective and ‘a’ or ‘an’ and a singular countable noun):

5. As a conjunction (connecting two clauses):

6. As a way of starting a new sentence:

7. In the conjunction phrase “so that”:

Note: When “so” is used as a conjunction:
It means “therefore”.
It is preceded by a comma.
It comes in the result clause.

In this case the result clause cannot be brought first or in other words it cannot start the sentence.

Remember: when “so” is followed by “that”, it means in order to

Each phrase can be used within a sentence when it is followed by a list of items which elaborate on or show examples for the main idea of the sentence. Here are

Look at the last sentence with such as. Do you see anything different with this sentence as compared to the first three? Such as does NOT have a comma after it; the first three phrases have commas before and after them.
The phrase such as can be used in the middle of a sentence without any commas. Take a look at this:

You may be wondering why there are no commas. The answer is simple: the words after such as are necessary and essential to the meaning of the sentence. If you take out those words, the meaning will change. Let’s take out such as:

What does this sentence mean? It could mean ALL car companies manufacture their automobiles in many different countries around the world. This is not true because some companies produce their cars in just one or two countries. Therefore, the phrase such as Toyota and Ford is necessary. If these words are
necessary, do not use commas.

Conclusion: I hope the lesson was helpful. Please feel free to write your feedback about the lesson in the comment box below.