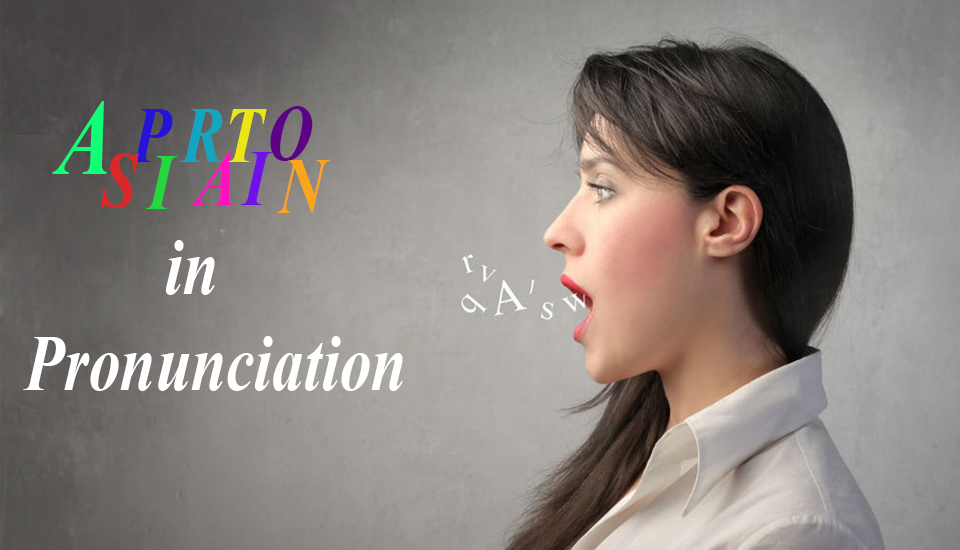 Aspirate: transitive verb:
A. To pronounce with the initial release of breath associated with the English “h”, as in “hurry.” “Some dialects do not aspirate the ‘h’ in ‘historical’.”
B. To follow a consonant with a puff of breath that is clearly audible before the next sound begins, as in English

Aspiration: noun:
A. The speech sound represented by English “h.”
B. the puff of air accompanying the release of a stop consonant.
C. A speech sound followed by a puff of breath.

Although most of the time English “p”, “t”, and “k” sounds are aspirated. (i.e. have the puff of air), there are certain situations in which English speakers produced them without this puff of air. In English, these un-aspirated consonants typically occur after an “s” which starts the same syllable.

There is no aspiration before unaccented syllables:

There is no aspiration when an unaccented syllable ends the word:

Aspiration is optional when an accented syllable ends the word:

In this optional case, aspiration can be used to express emphasis, (“This place is a dump!”) a pause, (“If we go to the dump, we should take the older truck.”) or a question. (Have you ever been to the dump?) Often no aspiration is the choice when the word is followed quickly by another word.

(“The little boy liked to watch the big truck dump the garbage.”) Aspiration is also used in this case when the speaker wants to clarify that the unvoiced form of the sound is intended. For example he might aspirate the “t” in “but” to clarify that he is not saying the word “bud.”

You can clearly see the aspiration if you hold a lighted candle, or—and this is much safer—a thin strip of paper vertically in front of your mouth. Hold it fairly close to your lips and say “pin”. You should see the candle flame flicker or the strip of paper bend away from your lips.

If you don’t see it, either (a) you’re holding it too far away from your mouth, or (b) you’re not a native speaker of English. In the first case, adjust the distance so that the paper (candle) is closer to your lips, and try again. The air which exits from your mouth and bends the paper (or candle) is the puff of air linguists call aspiration.

Try this a few times until you have the paper (or candle) responding with a bend (or flicker) every time. Now, keeping the paper (or candle) at exactly the same distance from your lips, say the word “spin.” Either the paper won’t move at all, or else it will bend much less than it did for “pin.” This absence of air movement indicates that the sound is un-aspirated.

To practice producing an un-aspirated “p”, “t”, or “k” sound, say a word like spin, stem, or skin very slowly. Say it more and more slowly until you consciously register how it feels to say an un-aspirated consonant sound. Now say it slowly, but just “think” the [s] and don’t actually say it out loud. Constantly check your pronunciation with the strip of paper (or candle) to make sure that you haven’t reverted and are still saying an un-aspirated sound.

Adapted from Speech and Oral Communication for College Students by
Rafaela H. Diaz.