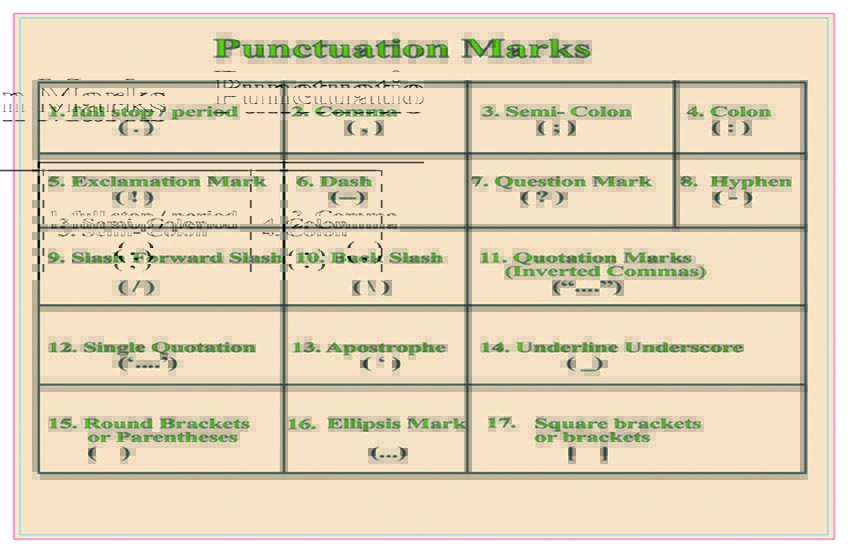 Although the words are same here, the two sentences mean completely different things because of the period (or full stop) and the question mark.
Here we will look at all punctuation marks with explanations and illustrations, hope they will be useful for you to use punctuation marks in your writing so on.

a) Use a full stop at the end of a sentence:
The rioters were taken away by force.
b) Use full stops with abbreviations (a short form of a word).
Co. (Company)   etc. (et cetera)    M.P. (Member of Parliament)
c) Do not use full stops with following contractions.
He’s, She’s, they’re, it’s, I’m etc.

A comma in writing is like a pause inside a sentence when speaking. Put a space after a comma. Do not put a space before a comma, and use it in the following situations.

a) Use a comma between items in a series or list. In a sentence, the last two items usually do not need a comma between them as they are separated by “and”.
My favorite foods are: beryani, vegetables, ham, and chicken.
b) Use a comma between three or more adjectives or adverbs.
I like the old, brown, wooden table.
He ran quickly, quietly and effortlessly.
c) For two adjectives, use a comma where you could use “and”.
It was a lovely, short performance. (It was a lovely and shot performance).
I have a big black dog. (I have a big and black dog.)
d) Use a comma in numbers over 999. (In English, commas separate thousands and periods separate decimals.
1,000 1,557 10.5 (ten point five) 1.5 (one point five)
e) Use a comma for addresses, some dates, and titles following a name.
Street#10, Block#3, Hazara Town, Quetta.
Feb 23, 2016 (but 23 Feb 2916).
f) Use a comma before or after direct speech. Do not use a comma for reported speech.
He said,”I am going to the cinema.”
He said that he was going to the cinema.
g ) Use a comma before a coordinating conjunction (for, and, nor, but, or, yet, so) to join two independent clauses. If the independent clauses are short and well-balanced, a comma is optional.
He didn’t want to go, but he went anyway.
I want to work as an interpreter, so I am studying English at university.
She is kind so she helps people.
h) Use commas for parenthetical elements. A “parenthetical element” is any part of a sentence that can be removed without changing the real meaning of the sentence.
Zahra, my wife’s brother, cannot come.
Zahra (my wife’s brother) cannot come.
i) Use a comma after an introductory element. A comma is optional for short, simple introductory elements.
Trying to get to the in time, they forgot to take their ticket.
As the year came to an end, he realized the days were getting shorter.
j) Sentence adverbs (words like however, unfortunately, surprisingly that modify a whole sentence) often require one or two commas, depending on their position in the sentence.
However, we played well in the match.
They, surprisingly, won the match.
k) An adverbial clause often needs a comma when it comes at the beginning of a sentence (but not at the end of a sentence).
If I win the lottery, I will buy a car.
I will buy a car if I win the lottery.
l) Do not use a comma to separate two complete sentences. In this case, use a full stop (period) or semi-colon.
I want to hang out with my friends. My brother wants to stay home.

a) We sometimes use a semi-colon instead of a full stop or period. This is to separate sentences that are grammatically independent, but that have closely connected meaning.
I like beryani; my brothers like spaghetti.
Ali is a good speaker; he speaks very clearly.
b) Use a semi-colon as a kind of “super comma”. When we have a list of items, we usually separate the items with commas. If the list is complicated, we may prefer to use semi-colons in some cases.
IELTS has test centers in many locations: Australia, London; Pakistan & India; and Manchester, Iran and Turkey.

a) Use a hyphen to make compound modifiers before nouns:
The boring-math teacher.
The well-known actor.
b) Use a hyphen with certain prefixes. The prefixes all-, ex-, and self- usually need a hyphen:
All-inclusive      ex-president         self-control
c) Use a hyphen when writing numbers 21 to 99, and fractions:
Twenty-five     one hundred and sixty-one        Two-thirds
d) Use a hyphen to show that a word has been broken at the end of a line (hyphenation):
Ladies and gentleman today, this evening has brou-
ght within its flawless festivities and exiting enjoyment.

a) Use a dash to show a pause or break in meaning in the middle of a sentence:
My brothers—Ali and Sakhi—are visiting Taj Mahal. (Could use commas.)
b) Use a dash like a colon to introduce a list:
Don’t forget to buy some food—eggs, bread, tuna and cheese.
c) Use a dash to show that letters or words are missing:
They are______football.

a) The backslash is used in several computer systems, and in many programming languages. It is commonly seen on Windows computers:
C:\Users\Win\Files\esl.doc

a) An underline is a horizontal line immediately below a piece of writing. In handwriting, we traditionally use underlining to indicate emphasis:
The meeting will start at 9 : 30 sharp.

a) Round brackets are basically used to add extra information to a sentence.
Ali (the former director of the academy) resigned from the academy in 2007.
b) Indicate plural or singular
Please leave your mobile telephone(s) at the door.
c) Add a personal comment
Many people love parties (I don’t).
d) Define abbreviations
We will invite the P.M (Prime Minister)

a) We typically use square brackets when we want to modify another person’s word. Here, we want to make it clear that the modification has been made by us, not by the original writer.
To add clarification: Manzoor said: “He [the teacher] hit me.”
To add missing words: It is [a] good task.
b) To modify a direct quotation:
He “love[s] exercising.” (The original words were “I love exercising.”)

The ellipsis mark consists of three dots (periods).
a) We use the ellipsis mark in place of missing words. If we intentionally omit one or more words from an original text, we replace them with an ellipsis mark.
“The articles focused on using punctuation marks in…to be useful.”
Here The new sentence still makes sense, but the ellipsis mark shows the reader that something is missing.

How to Write a Research Paper Fast – Step by Step Guide

Freedom With Limitation is No Freedom – Debate/ Speech for Students

Typical Mistakes in Personal Statement Writing You Should Avoid