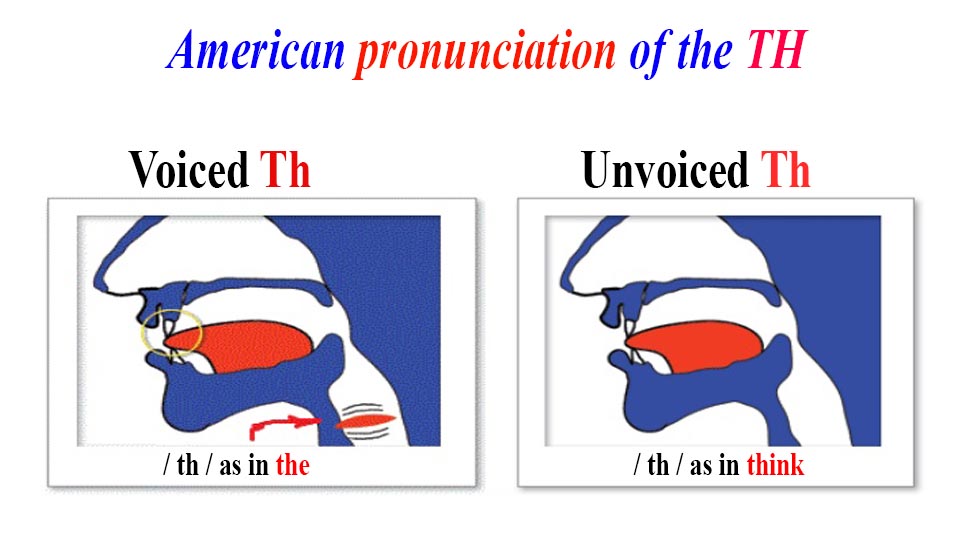 The most common word in the English language is “the”, so after the schwa, [th] would be the sound you would hear most often, which is why it is so important for ESL learners to master the American pronunciation of  TH. ([th] also exists in English, Greek and Castilian Spanish.) Besides “the,” there are several other very common words that start with a voiced [th]: this, that, that, those, they, them, their, there, then etc.

Just as with most of the other consonants, there are two types — voiced and unvoiced.

The voiced TH is like a D, but instead of being in back of the teeth, it’s 1/4 inch lower and forward, between the teeth. To produce this sound, the tip of the tongue sticks out a bit between the upper and the lower teeth.

The unvoiced TH is like an S between the teeth. Most people who have trouble pronouncing “th” tend to replace the unvoiced “th” with S or T and the voiced one with Z or D. Instead of “thing”, they say “sing”, or ting. Instead of “that”, they say “zat” or “dat”. To produce this sound put your tongue between your teeth and blow out air between your tongue and your top teeth.

This is a dental sound which means that you sound it by using your teeth (as well as your tongue). Make the front of your tongue have light contact with the back of your top, front teeth or your tongue tip can come out a little bit between your upper and lower teeth. Blow out and let the air pass through your teeth and tongue.