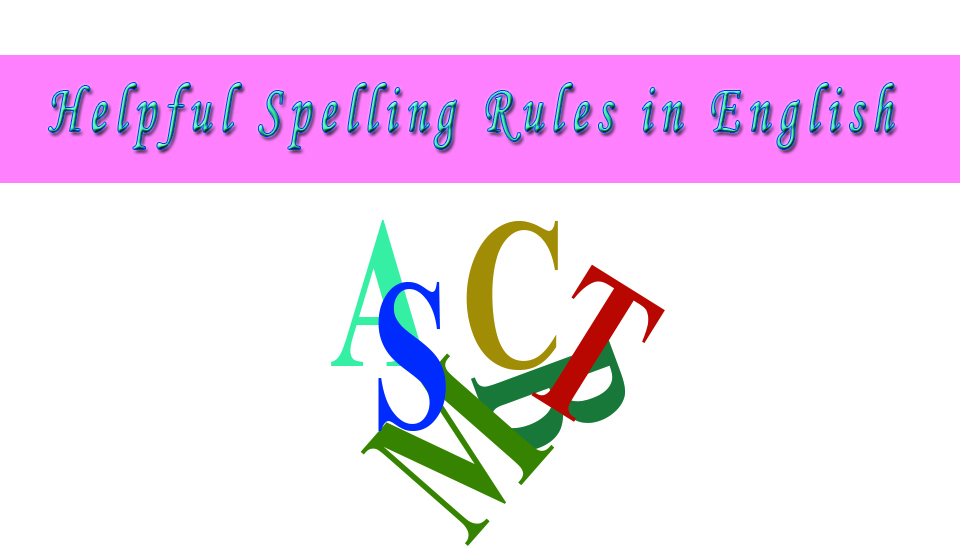 Of all the languages in the world English is the most difficult to spell. In other languages Italian for instance each letter only represents one sound, so if you know how to say a word in Italian you know how to spell it. In English, however, the relationship between sound and spelling is unpredictable. In this article I cover  basic spelling rules for English learners that will make easier for you to spell English words correctly.

For example in the following words the sound of “O” is represented by ten different letters or combinations of letters.
So, sow, sew, oh, owe, dough, doe, beau, soak, soul. And the same letter may represent many sounds in English. For instance look at the words below that the letter “O” represents seven different sounds.
So, to, on, honey, horse, women, borough. Here the letter “O” gives seven different sounds, that’s why English is hard to spell, though some people tried to fix English spelling, making it match the pronunciation, but none of them adopted because English sounds different in different countries.

Rule 1 (Spelling Rules Prefixes)
A) The prefix IN usually means not.

B) When added to a word starting with L, IN become IL.

C) When added to a word starting with M or P, IN becomes IM.

Rule 2 (Spelling Rules Suffixes)
A) when you add a suffix that begins with a vowel to a word that ends in silent E, you drop the E.
Suffixes that begin with vowels include: –able, -ing, -er.

B) When you add a suffix that begins with a vowel to a one-syllable word that ends with a single vowel and a single consonant, double the consonant.

C) When you add a suffix to a word that ends in Y, the Y usually becomes I.

The first rule deals with letters combination “ie” or “ei” many words in English contain this combination, but its not easy to remember whether to use “ie” or “ei”.
I before E, except after C, Sounds like A, and its spelled IE rather than EI.

Exceptions: Neither leisurely foreign sheik seized their weird height. Except the words in this sentence the rest words follow the rule.

Rule 4 (EFY)
In English we have four words that end in –EFY: liquefy, putrefy, rarefy, stupefy. Other words with the same suffix are spelled with -IFY.

When you have words that ends in this sound spell with -IFY except four exceptions.

How to Write a Good Essay?

How to Welcome Students Back To School/College After Covid-19 | Speech, Policies, and Safeguards

“I Will Pay Someone to Do My Assignment in Australia”: How to Apply Correctly for Assignment Help Online?