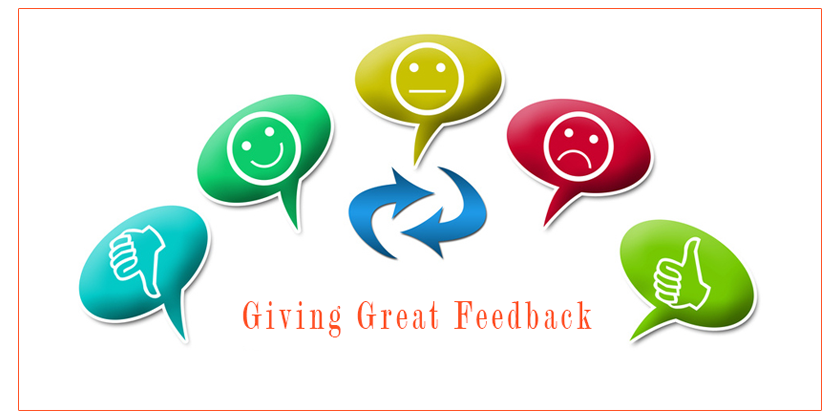 How to Give Great Feedback

Giving feedback shouldn’t be like making someone take medicine. It should be like offering a person something good to drink. It should be value-adding, relationship-enhancing, and you should feel good about giving it. Feedback should always be helpful and it doesn’t always have to be critical. Give plenty of positive feedback, not just corrective feedback. You don’t want a reputation as someone who only shows up when something’s wrong. This comes up in my coaching, the person who’s quick to point out problems, but has little to say when things are going well. One leader I coached even started noticing when he approached people they often winced and asked preemptively, “What is it now?” And no shortcuts.

Don’t stack a few good things just to get to the bad. Saying to someone, “Nice shoes, clean shirt, close shave. “let me tell you how you screwed up.” That’s not what to do. Consistently look for genuine opportunities to accentuate the positive in real time, that’s what to do. Build a reputation for appreciation.

Catch people making progress, notice when they do well and let them know it. But even giving corrective feedback you mission is always to help, it’s always to add value.

If it’s corrective feedback, give it in private, pick a suitable time and place for a conversation. Set a helpful tone, make it explicit , say there is something I want to share with you and I think you will find it valuable.

How to Give Great Feedback

When you give feedback and it applies both positive and corrective feedback, follow these four steps:

State a specific behavior instead of an opinion, judgment or feeling you have. For instance, don’t say,” you are not a good listener” rather say,” I have a different idea and you can continue talking.” That way, it’s not an opinion or generalization, it’s specific and it’s factual.

Secondly, clarify the impact of the behavior on you or others. Don’t say, “people think you really rude”, rather say, “I get in to hear marine’s point.”

Step three, listen – hear the person out. Dialogue with them to understand the reaction and acknowledge their plan which was probably different from the impact. Be open, be interested, listen and connect. You count your part might need time to observe and inaugurate your message emotionally.

Part up with in a discussion, you are not focusing in what they did wrong, you are trying to help them to achieve the positive impact they want and you want too.

Finally, ask them if they are open to suggestions if you help them or offer to brainstorm alternatives with them. Help them like a partner not a critic. Remember, even if you are a little nervous about delivering the feedback, you are not there just to deliver information, you are there to add value. You want to have a positive impact; you are the person end a relationship, coming up better because of this conversation.

And you want them to appreciate you took the time, maybe offered and treated with dignity and respect. So, when you are delivering tough news, put thought and efforts in what it is like for them to receive it and make it clear in your words and body language that your intention is to help.

Let’s put it into action, next time you give feedback follow the four steps:

What Are The Qualities of Best Writing

How to Write Introductory Paragraph With Example

It looks like you are sharing great information. Thanks,