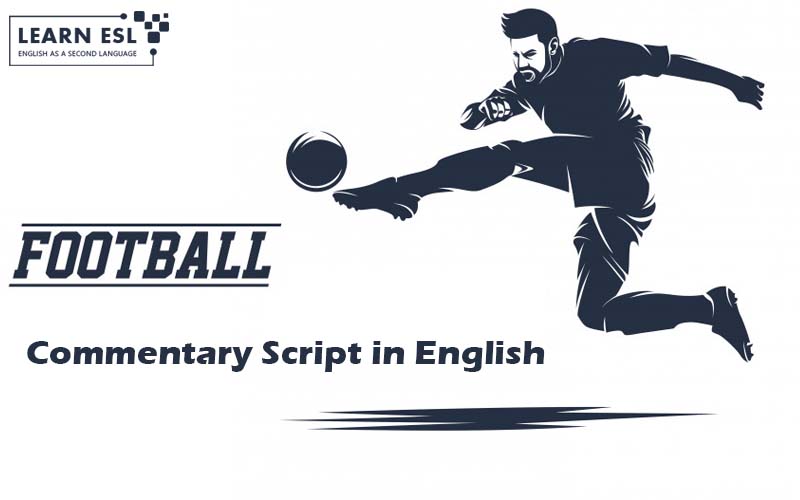 Football is a very famous sport in all over the world and this sport has made a lot of fans globally. Nowadays if you see this game is played anywhere: school, college or university where teams compete with each other. If you are having any football tournament and searching for football commentatory script then you are in the right place. In the article below I am going to tell you how to write commentary script for football match with example.

As you know that football is very popular because it can literally be played anywhere, all you need is a ball. It also doesn’t require very many players, whereas games of rugby or American football would often need more players. I believe that it is footballs ability to evoke huge amounts of passion from all generations and from all countries that makes football the biggest sport on the planet.

For the first time on January 22, BBC Radio broadcast a football match where Wakelam called the play. By 1931 the BBC were broadcasting over one hundred games a season. Six years later, they presented the first football match on live television where the had a good commentatory.

Commentatory in a football match is not an easy task. You might think you just turn up to do commentary and it’s as simple as talking off the top of your head. I can assure you, it’s anything but if you don’t have experience it will be difficult for you for the first time.

Below I have accomplished commentary script for a football match from the match of FC Barcelona and Real Madrid hope it will help you and give you a clue to proceed as a commentator in a football match.

Hello and good evening everyone. What a moment where everyone is on their feet and holding a flag and supporting their team.

Take a look at the table right now and it is Barcelona 76 points Atletico winning pocket at 70 Real Madrid at 66 now again on paper it seems even with the defeat here today Barcelona should be able to coast home but stranger things have happened.

Now let’s get ready to rock and roll these two footballing teams exemplify in the spirit of the football that grace displayed in different ways perhaps but world-class footballers again.

There is history to be made or added to 170-second league match between these two and Ray 200 in 31st 92 wins for Real Madrid 90 for Barcelona, it is hard to separate these two in a rivalry that dates back to the turn of the last century allied on the far side Neymar checking back.

Marcelo both of these teams going with their star lineups a star turn for rocket engine for muscle back to novice some of the Barcelona fans wanting a back pass it was a good defensive boy from Modric yet seeing that Messi it identified niyama who had peeled a whip on that far side from Carvajal real effort but good cover from Luca.

Teasing that man with the offside flag very coarse when the balls played in a lifetime.
Even Sergio Ramos in the middle seems to be on the wrong side of Suarez.
So we’ll see Samira with a little push in the back but he would get away with it but no Alejandro hernández the man in the middle with the whistle

Better pick and choose when he launches in against these super sharp Barcelona he has in front of him pick your poison we will drag defense with him trying to get it back deflected by Benzema where it could have been dangerous close out by bends in.

The coach of course, has the benefit of it fully rested and fit Benzema and Gareth Bale not quite the same for Barcelona’s front.

it’s a Good call by the referee and Danny coming through flipping the angles of the dark in Theodore may 39 straight matches without defeat for Barcelona.

Take a look again this again looks a very very close call Phil when the ball is hitting you in there again and for it is still fastest, it’s don’t you wear dark matter.

Neymar trying to keep up with himself as well changes his name so many times it’s a good ball and for Benzema takes it off.

Brilliant from the frenchman picks it up and sees his options and fancies himself one on one against DK who reads him beautifully and again top class it’s a wonderful turn again keep him coming.

Brilliant play from swaddles it was again no more jumps in front of Pepe the fourth minute ticking down the ballin for Messi as an angle Messi in for Suarez.

Actually, the sets got their birds the early part of this game I’ve been singing this much praise is all day long that he will come up with saves like this to take your breath away and to put your jaw on the ground.

The breakthrough goal coming from the beheaded boy Niki Sanders.

This was a statement game I said coming in Barcelona that’s it more than enough to win this game but they missed their chances and Cristiano Ronaldo did not smile little late up the Stars and eclipse the Sun the man of the moment Cristiano Ronaldo and he was the difference-maker.

it was a thriller at the end the scoreless first half and three huge goals in the second including a Ronaldo winner at the wire the clásico goes reals way on ground and all the reactions and fall out.

How to Learn the English Language Through News Channels