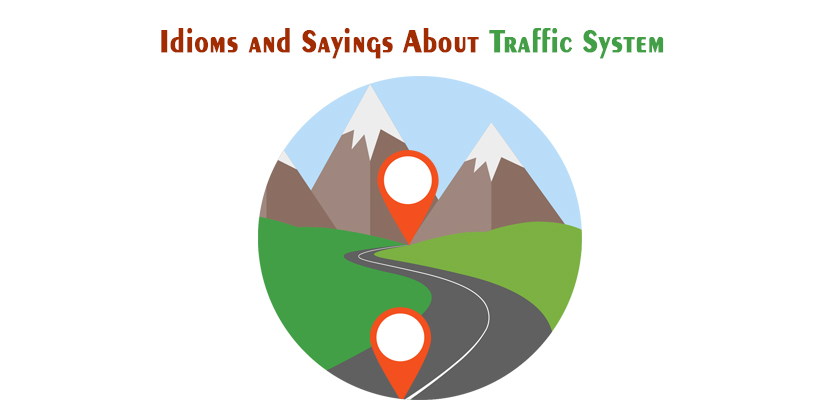 Idioms and Sayings About Traffic System

Idioms and Sayings About Traffic System

1. As much use as a handbrake on a canoe– This idiom is used to describe someone or something as worthless or pointless.

3. At the crossroads- If you’re at a crossroads, you are a point where an important decision or choice has to be made.

4. Backseat driver- A backseat driver is an annoying person who is fond of giving advice to the person performing a task or doing something, especially when the advice is either wrong or unwelcome.

5. Beam me up, Scotty- Something someone says when they want to get out of a place or situation, meaning ‘Get me out of here!’ (It comes from the TV series and movies Star Trek, though the exact words used were a little different.)

6. Built like a Mack Truck- (USA) This is a common phrase used in the US among its citizens to refer to something that is rugged and solidly built that will provide years of reliable service. It can be a reference to a person, building, piece of furniture, a structure, etc.

7. Circle the wagons- (USA) If you circle the wagons, you stop communicating with people who don’t think the same way as you to avoid their ideas. It can also mean to bring everyone together to defend a group against an attack.

8. Clear the decks- When you clear the decks, you get ready for an important action and put away items that might get in your way.

10. Cool your jets- (USA) If someone is angry or unsettled, telling them to cool their jets means they should calm down.

11. Country mile- (USA) A country mile is used to describe a long distance.

13. Fall off the wagon- If someone falls off the wagon, they start drinking after having given up completely for a time.

14. Fifth wheel- (USA) A fifth wheel is something unnecessary or useless.

15. Full throttle- If you do something full throttle, you do it with as much speed and energy as you can.

16. Go play in traffic- This phrase is an unkind way of telling someone to go away.

17. Go to town- Someone who goes to town does something enthusiastically and as completely as possible, especially if this involves spending a lot of money.

18. Hit the road- When people hit the road, they leave a place to go somewhere else.

19. I’ll cross that road when I come to it- I’ll think about something just when it happens, not in advance.

23. Jump ship- If you leave a company or institution for another because it is doing badly, you are jumping ship.

24. Jump the track- Jumping the track is suddenly changing from one plan, activity, idea, etc. to another.

25. Kick into gear- If something kicks into gear, it gets going or started.

26. Kick over the traces- Kicking over the traces is wild rebellious behavior or being out of control. It comes from when a horse in harness got a rear leg over the traces, which attach it to the vehicle, it started pulling and became uncontrollable.

28. Move up a gear- If you move up a gear, you start to perform in a clearly better way, especially in sports.

29. Off the track- If something puts or throws you off your track, it distracts you or keeps you from achieving what you want.

30. On the wagon- If someone is on the wagon, they have stopped drinking alcohol.

36. Right up my alley- If something is right up your alley, it suits you perfectly.

38. Rocky road- If someone is going down a rocky road, they have problems and difficulties to deal with.

39. Running on fumes- If someone has used all their energy on something, but must continue, they are running on fumes. It is an expression used when driving a car when the needle is on empty but still running. We say it is ‘running on fumes’.

40. Ship came in- If your ship has come in, something very good has happened to you.

41. Smooth sailing- If something is smooth sailing, then you can progress without difficulty. (‘Plain sailing’ is also used.)

43. Step up a gear- If you step up a gear, you perform noticeably better, especially in sports.

47. There’s never a road without a turning- No situation in life stays the same forever.

49. Tight ship- If you run a tight ship, you control an organization or business firmly to maximize performance.

Happy New Year Quotes and Wishes to Send as Message

Would You Ever Questions For Conversation