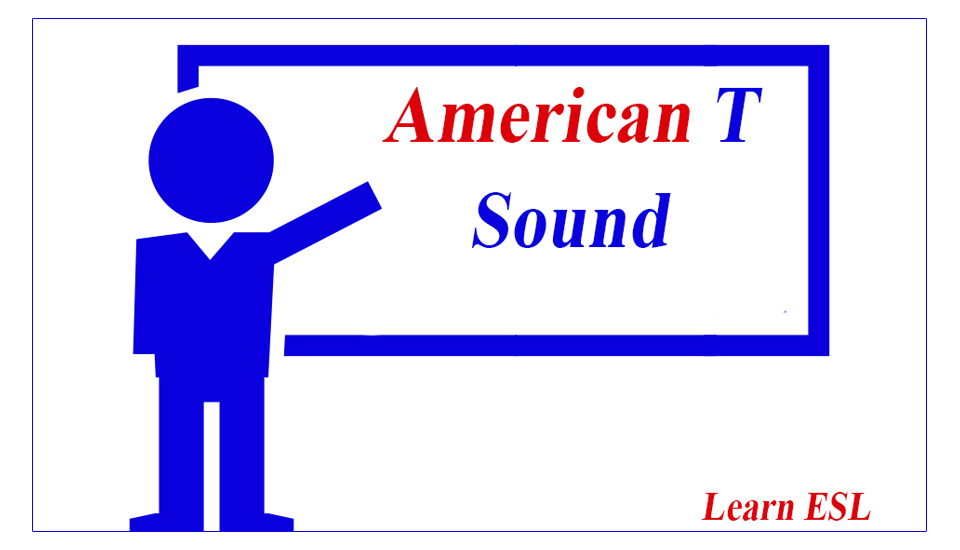 The American T sound is one of the common letter pronounced wrongly by ESL learns. Indeed, The American T is made by intonation and its position in a word or phrase. It can be a little tricky if you try to base your pronunciation on spelling alone. In this lesson you will learn thoroughly how to pronounce the letter T.

Silent T- The letter T is not pronounced in some words (you need a dictionary to learn which words):

(In the cluster TCH)

Final T in many modern words with a French origin:

A. If the T is at the beginning of a word, it is a strong, clear T sound.

B. If the T is at the beginning of a stressed syllable in the word it is a strong T sound.

C. If the T is part of a consonant cluster (two or more consonants together in the same syllable) wherever the cluster comes in the word, the T will have an official T sound.

Exception: If the word ends in “nt” we often find the Stop T (see below) in American English:

Note: grammatical words with a weak/reduced pronunciation (often pronounced with a schwa /ə/) may behave like just a new syllable instead of a new word, so in the sentence:

The preposition “to” can often be pronounced with a flap T (see below) because it sounds “goto”, so the T goes between vowels, not at the beginning of a stressed syllable (grammatical words have no stress), so it may sound “go-da”/goʊdə/ .

Flap/Tap T /d/ == between vowels (v+T+v) or R and a vowel (vr+T+v), etc. (This is a strong and quick version of D). The proper phonetic name for the flap T sound is alveolar tap.

A. If the T is in the middle of the word, intonation changes the sound to a soft D.

D. If the T is followed by a vowel in the next word, the soft D sound is often made.

Exception: When the sequence is vowel + T + schwa + N, the T is pronounced as a Stop T (see below) for example:

Rule 1 is more powerful than rule 2, so if we have a T between vowels but it begins a stressed syllable, the pronunciation is the official/t/, for example:

This rule is not part of the American or English accent, but you can hear it very often in American English, especially in some parts of the country, when people have a careless and/or quick pronunciation. This basically means that the T may disappear in American English (not BrE) after an N, so the word “wanted” may sound “wanned”/wɑnɪd/ and “interesting” may sound “inneresting”.

T and N are so close in the mouth that the [t] can disappear.

Stop T /t|/ == used at the end of a word, etc. (we suddenly close our throat to stop the air flow, but make no sound; IPA symbol /ʔ/, called glottal stop)

glottal stop: noun phrase : a speech sound made by briefly stopping the flow of air through the vocal cords. “The ending sound of the word ‘didn’t’ is pronounced with a glottal stop after the n.”

A. When a T is followed by an N sound (usually with an unpronounced vowel in between), the T is held, creating a “Stop T”. The “held T” is, strictly speaking, not really a T at all. Remember, [t] and [n] are very close in the mouth. If you have [n] immediately after [t], you don’t pop the [t]—the tongue is in the [t] position, but your release the air for the [n] not the [t]. Make sure you don’t put a schwa before the [n]. An important point to remember is that you need a sharp upward sliding intonation up to the “Stop T,” then a quick drop for the N.

In the exceptions we have seen, we already commented two cases:

Exception to rule 2: v+T+schwa+N = v+T+N =/t|n/ (tighten, written) But most of all, we find this pronunciation at the end of words or syllables (about, fitness)
There are two exceptions (because rules 1 and 2 are stronger than rule 3)

Rule 1: Consonants clusters have the official T except NT, which may also have stop T in American English.

The sound [ch] is represented by the combination TU in two common suffixes: “-ture” and “-tual”. It can also happen colloquially in the non-standard phrase “what you” when the verbs “are” or “do” are dropped: “What (are) you doing?” becomes “Whatchu doing?” and “What (do) you want?” becomes “Whachu want?” More standard examples follow.

“T sounds like a CH — I’m not sure I’ve come up with a specific rule here yet. But I know it often happens in words like ‘actually’ and ‘puncture’ but not every CTU case, like ‘cactus’. It also happens a lot, though not a part of the official pronunciation, in the phrase ‘what you’ when reducing by dropping the ‘are’: whachu doing?”- According to Rachel from Rachel’s English.com

Make your own examples and sentences with words having the “tu” pronounced like “ch” sound. Please feel free to leave your feedback about the article in the comment box below.

Using Props and Visual Aids in Your Presentation

English Phrases And Vocabulary Relating to Movies And Films

Betty Botter bought a bit of butter to put it in her batter.
“But,” she said, “this butter’s bitter, if I put it in my batter it’ll make my batter bitter. But if I had a bit of better butter, it’d make my batter better.”
So Betty Botter bought a bit of better batter butter.
Beddy Bodder boughd a bid a budder to pud id in her badder.
“But,” she said, “this budder’s bidder, if I pud id in my badder id’ll make my badder bidder. Bud if I had a bid a bedder budder, id’d make my badder bedder.”
So Beddy Bodder boughd a bid a bedder badder budder.