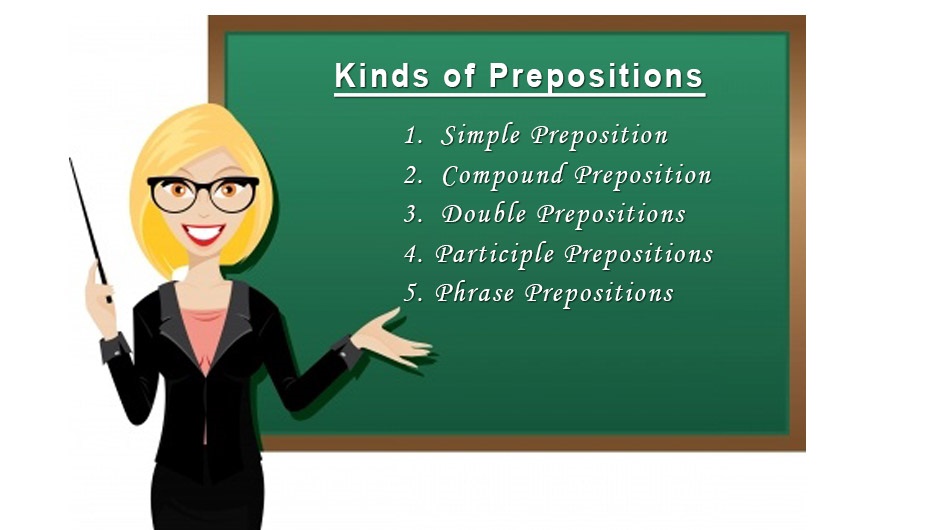 • I am not coming with you.
• She is in the park.
• We are going to the market
• She dived into the water.
• The Pakistani players were genius from the beginning of the tournament.

• Ali is sitting beside Zahra and Ahmed.
• I will reach there before she leaves.
• There is something strange about him.
• There’s a bank right across the street.
• This attitude is common among the under -25s.

3. Double Preposition
Double prepositions are two (prepositional) words which are joined together to connect nouns, pronouns, and phases with other words in sentence.
Common Double Prepositions: (Outside of, out of, from behind, up to, next to, because of, according to, etc.)

• Suddenly he emerged from behind the curtain.
• The match between Pakistan and India was delayed due to rain.
• Nobody outside of this class should know about the plan.
• According to the news reporter, the weather will be cloudy today.
• Next to skiing my favorite sport is skating.

• Barring accidents, we should arrive on time.
• He took charge of the family business following his father’s death.
• No one should talk during the class.

• I am playing in the team on behalf of captain today.
• He succeeded by means of perseverance.
• We could not win the match in spite of playing good.
• Natural honey has been used for centuries on account of their healing properties.

Direct and Indirect of Past Perfect Progressive

hi mr bismo. by the way where are you from?
I want to give opinio.

Your recommendations are appropriated Sayid.

Hi,
You can find the complete explanations in the links below:

Wonderful bro your ideas are unique.