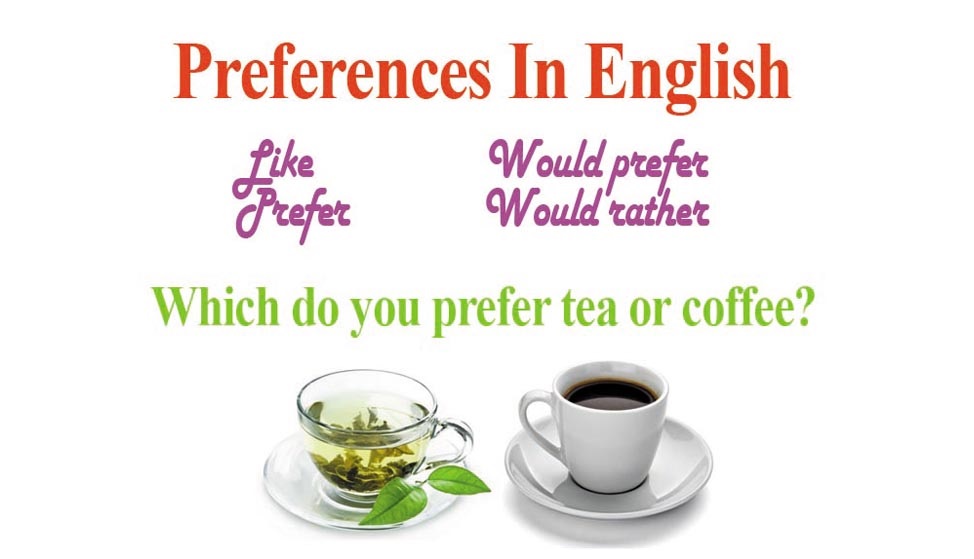 Preferences are one of the most basic conversational demands when given a choice between two items,  Which one to select. There are indeed different ways in English we can ask about preferences. To ask about people’s general tastes or preferences, we often use words like: prefer, would prefer, would rather and like to say we like or give priority one thing or activity more than another.

To ask about people’s general tastes or preferences, we can use one of the following.

These expressions mentioned in the sentences  are quite different in meaning, in forms and different prepositions to sate choice.

The Difference in meaning (Prefer, would prefer and would rather)

Prefer: We use the word ‘prefer’ to talk generally about likes, dislikes, what we want.

Note: We can use Prefer, would rather to express general preference.

Difference in form  (Prefer, would prefer and would rather)

Would rather is followed by the bare infinitive (base form of the verb).

Note 1: We use a past tense after would rather when we speak about the actions of other people, even though that action may be in the present or future.

Note 2: We can use much with prefer, would prefer and would rather to make the preference stronger. In speaking, we stress much.

Remember: When we want to refer to the past, we use would rather + have + -ed form (perfect infinitive without to):

Different prepositions to state the choice.

Rather than: used with the infinitive form of a verb to indicate negation as a contrary choice or wish. We say: would prefer . . . rather than / instead of.

Would rather: We use the preposition  “than” to state choice with would rather.

Like: We can use like to talk about things or people which we enjoy or feel positive about.

We talked about preferences, which is one of the most conversational demands, for this purpose, we use the words: like, prefer, would prefer and would rather to say we give priority or like one thing more than another. Remember these words are not in any progressive tenses.

Past Continuous Tense Definition and Examples