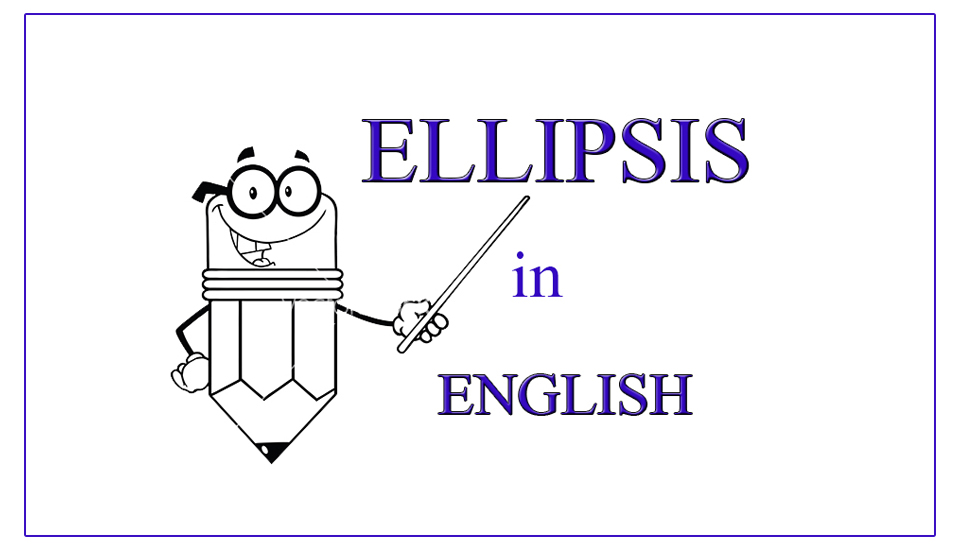 What is ellipsis? Do you use it in your conversation and writing? Read the whole article to know when to use ellipsis. We often leave out words to avoid repetition or in other cases when meaning can be understood without unnecessarily repetitive words in a sentence, is called ellipsis. Indeed ellipsis is very common, especially in informal conversation and in writing. In this article, you will learn what an ellipsis is and how to use ellipsis in your writing and speaking.

2. Structures with (and, but, or):
Repeated words are often dropped in coordinating structures.

Seen lucky (You have seen lucky).
Does not know what to do?

4. At the end of verb phrase:
Auxiliary verbs are often used alone instead of a full verb.

5. With infinitive:
We can use “to” instead of repeating the whole infinitive.

Are you and Ms. Maryam getting marriage?
Answer. We hope to. (We hope to get married).

7. Ellipsis after adjective:
A repeated noun can sometimes be dropped after an adjective if the meaning is clearly understood.

8. Articles
In informal conversation, we can sometimes omit articles (a/an, the) when they are obvious from the context and when we use them at the beginning of a sentence:

A: What are you looking for?
B: [A] Pen. Can you see one anywhere?
[The] Postman’s just been. There’s a letter for you.

What is ellipsis in writing? In writing, an ellipsis is (…) three dots used to show an omission of word or words (including whole sentences) from a text. We use it in our writing to create a pause or to show an unfinished thought.

In formal writing, the most common way to use an ellipsis is to show that you’ve omitted words. For example, if you’re quoting someone and you want to shorten the quote, you use ellipses to indicate where you’ve dropped words or sentences. Consider the example below:

“I cannot help it; reason has nothing to do with it; I love her against reason.”
“I cannot help it . . . I love her against reason.”
In the second example above the part of the sentence seems unnecessarily repetitive, and taking it out doesn’t change the meaning, instead, you can use … ellipsis, but be sure you don’t change the meaning.

Using Ellipsis in Informal Writing (From Your dictionary)

Stories and novels use ellipses to a very different effect. An ellipsis can demonstrate a pause in dialogue, a pause in narrative, or a character or a narrator trailing off.

He stammered “I’m not sure what to do…” (Pause in dialogue)
He was without hope . . . desolate, empty . . . the epitome of a broken heart. (Pause in narrative)
Was the challenge too big to handle, or was it just growing into something else like . . . (Character or narrator trailing off)

Note: The format of these ellipses is typically to add a space between each dot, and remember an ellipsis consist of exactly three dots called ellipses points.
A pause in the text appears much the same way.
She was angry . . . she was just tired.
This case uses an ellipsis similar to what would be used in a piece of news writing, but it is understood that the character who is speaking is merely pausing for emphasis or thought. No words were omitted from his or her dialogue.

How to Speed Up Your Reading