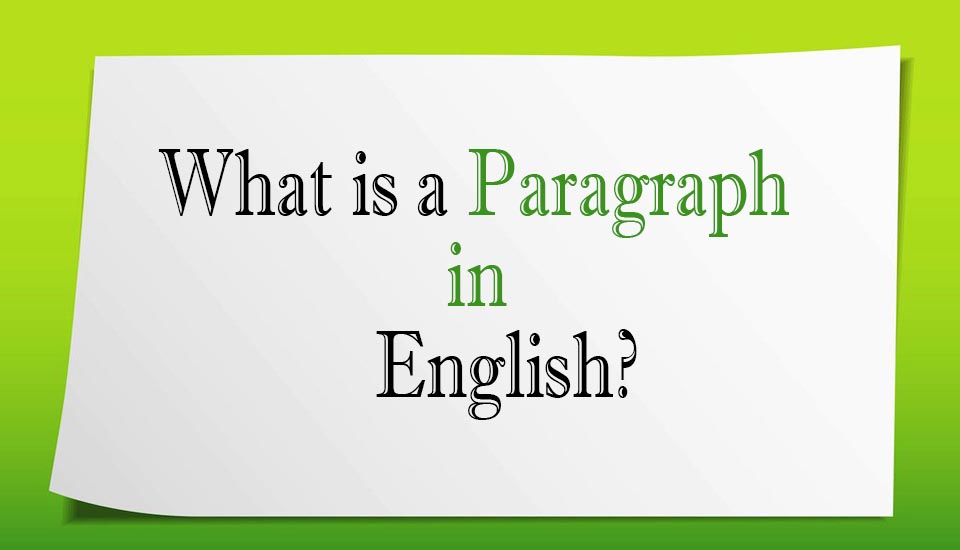 What is Paragraph in English?

What is Paragraph in English?

Definition:
A subdivision of a written composition that consists of one or more sentences, deals with one point or gives the words of one speaker, and begins on a new usually indented line.
A paragraph has a topic sentence, a body to support the topic and a conclusion. The topic sentence discusses the overall subject of the paragraph, while the body explains an event, policy or idea. Paragraphs have an attitude, which explains an opinion or emotion on the subject. There are seven different paragraph styles to use in writing, each with their own purpose and message.

Main idea:
The main idea of a paragraph tells us what the paragraph is mostly about.

Read and think about the following sample paragraphs, in which the main idea sentences are underlined.
Paragraph One
It is often said that lightning never strikes twice in the same place, but this isn’t true. Go ask the forest rangers. Rangers who spend their summers as fire-fighters will tell you that every thundershower brings several bolts of lightning to their lookout stations.
(Notice that the first sentence tells what the paragraph is about; the sentences that follow support the idea stated in the first sentence.)

Paragraph Two
Costs were low that year and the output high. There was a good person for each job and the market remained firm. There were no losses from fire. All in all it was the best years in the history of the company.
(Note that the first three sentences give details to explain why it was the best year in the company’s history.)

Paragraph Three
There are great numbers of deer around here. This whole area is great country for hunters and fishermen. There are bears, mountain lions, and coyotes. To the east there are streams full of trout, and there are ducks and geese.
(The author begins and ends with examples. The main idea is stated in the second sentence.)

Paragraph Four
Advertising affects our lives every day. Brand names are common household words. We start each day using the toothpaste, soap, and breakfast foods promoted by advertisers. Ads have made the cars we drive signs of our success. Our choices of food, dress, and entertainment are swayed by ads. Not one aspect of American life is untouched by advertising.
(The main idea is stated at the beginning of the paragraph and then restated at the end.)

Paragraph Five
Penicillin is one of the greatest of the wonder drugs. It has saved thousands of lives already and will save many more in the future. Unfortunately, it has no effect at all on most of the ills of mankind. Penicillin is a very good drug, but it is certainly not a cure-all.
(The author has split the main idea. This paragraph begins with positive comments on penicillin. The word ‘but’ signals a shift in thought and the paragraph ends with a statement of its limitations.)

Paragraph Six
Do you wear glasses? Make sure your glasses fit well. The earpieces should be at eye level. Don’t try to adjust the earpieces yourself. Take your glasses for adjustments to the place you bought them. Keep your glasses in a case when you’re not wearing them. This will prevent scratches. Keep the lenses clean. A soft cloth is best for cleaning.

(The main idea is implied. All of the sentences in the paragraph give details about a main idea. In this paragraph the implied main idea is that taking care of your glasses involves many steps.)

EXERCISES:
Below is a list of six paragraphs which can be used as an exercise in the class by English instructor. Each paragraph is followed by four statements. Select the statement that best expresses the main idea. Circle the letter of that statement.

1. People often refer to taxes in terms of their being much too high. In reality, they are probably even higher than you think, because in addition to the federal income tax we are now studying, there are many other Federal, State, and local taxes, including sales taxes, inheritance taxes, state income taxes, personal property taxes, real estate taxes, and others. These are just some of the most obvious ones.

a. Taxes are much too high.
b. We pay more taxes than we may realize.
c. Inheritance taxes and real estate taxes are unfair.
d. Some taxes are hidden.

2. The fact that electronic computers are now used for data processing has led the general public to believe that it is a mysterious, complicated science and that the computers are giant brains. Both of these ideas are false. A computer is basically just a high-speed adding machine that performs the functions it is told to. If the input data are varied even a little, the computer is unable to operate until it is programmed to accept the variations. The business operations it performs are impressive only because of the extremely high speed of manipulation, but most of these operations have been used for decades. Unlike man, the computer performs repetitive calculations without getting tired or bored.

3. The Louisiana Purchase proved to be one of the shrewdest business pacts in the entire history of the United States. The purchase doubled in the area of the country and provided territory from which fourteen new states were created either wholly or in part. It also gave us control over the mouth of the Mississippi River and opened up the way to foreign trade. Prior to the purchase, the waterway had been blocked by the Spanish, probably with the approval of Napoleon. The land that was bought was rich in timber, minerals, and natural resources of many kinds. Finally, the cost of the transaction was unbelievably low; the total of $15 million amounted to about four cents an acre.

4. There is a common belief that while the dog is man’s best friend, the coyote is his worst enemy. The bad reputation of the coyote traces back to his fondness for small animals; he hunts at night and is particularly destructive to sheep, young pigs, and poultry. Yet it is sometimes wise to encourage coyotes. Provided valuable farm animals are protected, the coyote will often free the property of other animals, like rabbits, which are ruinous to crops and certain trees. He is especially beneficial in keeping down the rodent population. Where coyotes have been allowed to do their work without molestation, ranchers and fruit growers have found them so valuable that they would no more shoot them than they would shoot their dogs.

a. Under certain conditions the coyote is helpful to man.
b. The coyote is feared because of his fondness for small animals
c. Modern ranchers would no sooner shoot coyotes than they would shoot dogs.
d. The coyote usually prefers rabbits and other rodents to sheep and poultry

5. In earlier days those who had overseas business which they believed should be discussed personally, took ship and set out across the briny deep. Once aboard they transacted their affairs, engaging in commercial and social matters or conducting government business. Today ships and passengers continue to sail the seven seas, and airplanes soar overhead. But above them all, words speed through the sky – telephone conversations quickly bring together in the most personal fashion people who are separated by thousands of miles.

6. The attitudes of Americans toward gambling are amazingly contradictory. You may find, for example, that horse racing is legal in your state, but that you cannot legally play poker for money on your front porch; bookies may be prosecuted by state law, but they are supposed to purchase a federal license nonetheless; one church condemns gambling, while another raises money by sponsoring Bingo games. Gambling laws are inconsistent from state to state or even from town to town and are very difficult to enforce.

How to Write a Literature Review Paper in English