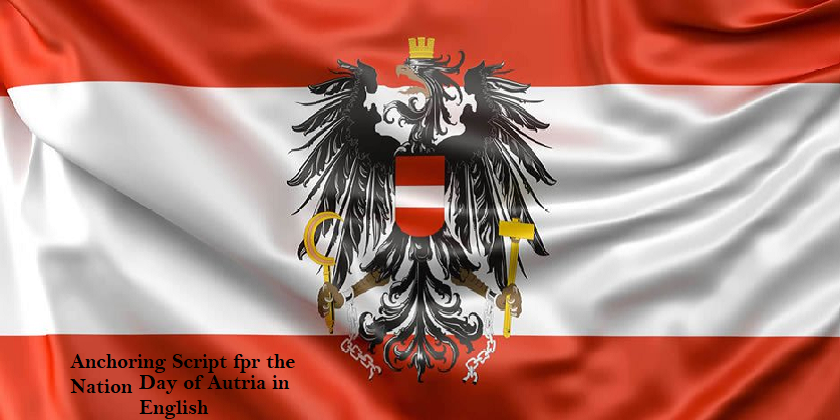 Every year on October 26, Austrians celebrate their country’s declaration of neutrality after World War II and its regained status as an independent and sovereign nation.

It was a declaration by Austrian parliament declaring the country permanently neutral; enacted on October 26, 1955, as a constitutional act. The declaration was a result of the allied occupation by the Soviet Union, the United States, the United Kingdom, and France between 1945 and 1955. The Soviet Union would not have agreed to the signing of a State Treaty in May 1955 if Austria had not committed itself to declare its neutrality after the allied forces had left the country. The final foreign troops left Austria on 25 October 1955.

The Austrians celebrate this day each year with a series of events in Vienna:

The citizens get offers to visit the federal museums for free. Various institutions also traditionally open their doors for the day (ie. the Federal Chancellery). Moreover, Austrians organize so-called “marches for fitness” to raise awareness among the population about the benefits of exercise and fitness. In addition, around the world, the Austrian Embassies celebrate the National Day with receptions for the Austrian citizens.

Therefore, I have brought you the Anchoring Script for the National Day of Austria in English.

Anchor 1: Hello and good morning, everyone. We hope you are all in good shape. The reason we all have gathered here is to celebrate the National Day which is one of the most important events that Austrians celebrate.

Anchor 2: Seeing that, I on behalf of (name of the second speaker), Respected principle, hardworking teachers, and the entire school family, welcome you all ladies, gentlemen, and dear students to our today’s event/ceremony.

Anchor 2: “The only way to deal with an unfree world is to become so absolutely free that your very existence is an act of rebellion.” –Albert Camus

To start this beautiful day, we want you all to stand up for the National anthem and flag ceremony.

Anchor 1: Thank you, everybody.

Anchor 1: We dance for laughter, laughter, fear, hopes, screams; we are dancers; we create dreams.

Anchor 2: Put your hands together for our little dancers who have worked so hard to welcome you all.

Anchor 1:  Wow, it was a splendid performance. We are sure that their performance made you glad.

Anchor 2: We hold these truths to be self-evident: that all men are created equal; that they are endowed by their Creator with certain unalienable rights; that among these are life, liberty, and the pursuit of happiness.

Moving forward, we want (name of the speaker) to be present on the stage for his speech.

Anchor 1: ”For to be free is not merely to cast off one’s chains, but to live in a way that respects and enhances the freedom of others.” Thank you (name of the speaker).

Anchor 2: Dear audience, real life is so messy, and drama is the shaped-version of the real life. In fact, the drama is very important in life: You have to come on with a bang. You never want to go out with a whimper.

Therefore, our students have prepared a drama that illustrates the current situation in Austria. So, call them on the stage give them a big round of applause, please.

Anchor 1: Thank you, guys, for such a great performance and fine illustration.

Calling principle on the stage

Anchor 2: It is time to bother the person without whom it has all been impossible. So, put your hands together for him.

Anchor 1: Thank you, sir. We appreciate your hard work and dedication towards this institute.

End of the ceremony

Anchor 2: Unfortunately, the time\day has come to its end. But before, we wish you all happy independence day\ National day. Besides, health, peace, happiness, and success. Have a great time!

I hope the article Anchoring Script for the National Day of Austria in English was helpful enough for you. You can add some more speech, drama etc according to plan for the day. And feel free to share your views in the comment section below.

Improve Your English by Reading Books

Comparing script for independence of Morocco

What Are The Qualities of a Great Teacher