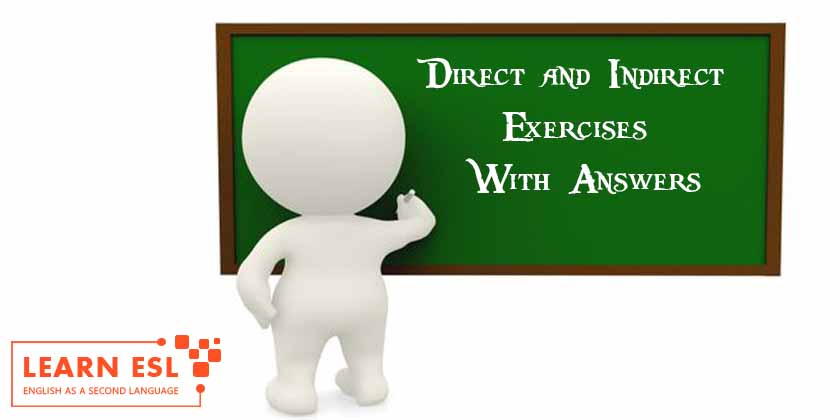 Direct and Indirect Exercises With Answers

We often convey a message or give information about what someone said, thought, or felt to somebody else. In order to do this, you can use the grammar structure named indirect or reported speech. direct and indirect rules have already talked about, below we have prepared direct and indirect exercises with answers for ESL learners.

Attempt the exercises below then compare your answers with the correct answers given below.

The following sentences use quoted speech. Change the following sentences from quoted speech to reported speech.
1.) James said, “I am watching TV.”
2.) Professor Jones said, “I worked all day!”
3.) The president said, “I will be visiting Italy in December.”
4.) The weatherman announced, “It may rain today.”
5.) My father screamed, “I have to go to the airport, now!”
6.) Then my mother said, “I must take your father.”
7.) The psychologist said, “You should calm down.”
8.) I responded, “I ought to leave the office.”
9.) Mark said, “I love visiting China and Korea.”
10.) Martin said, “I can be a great president!”
11.) Sung-He said, “Close the windows”
12.) Bobby will say, “I have already done direct and indirect speech exercises.”

I hope the direct and indirect exercises were helpful to you and if you would like to know more about direct or quoted speech, or indirect or reported speech, check out more in the book below.

Though, Although, in spite of and Despite Exercise With Answers