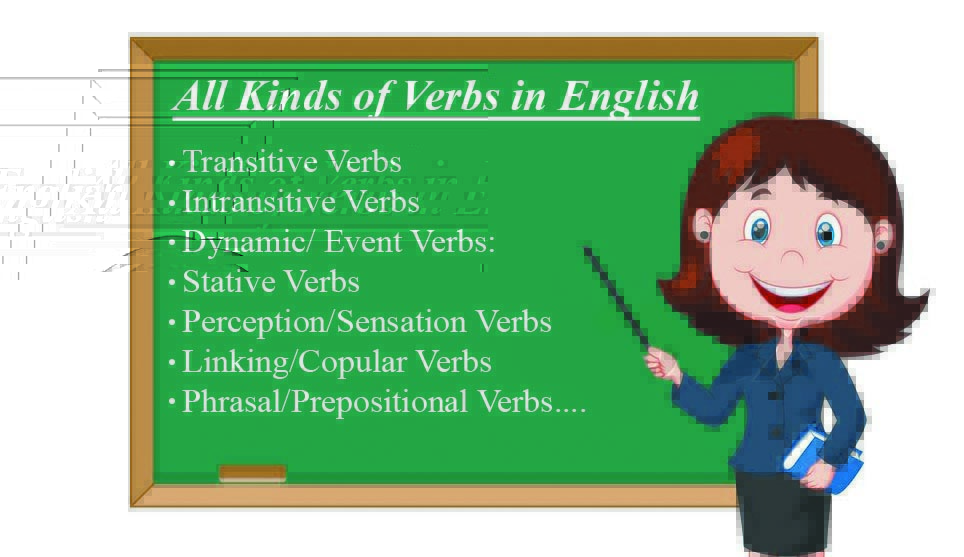 12 Kinds of Verbs in English

Before jumping into 12 kinds of verbs in English, you should know that verbs are a significant part of a sentence, without which a subject cannot make a sense in a sentence. In English basically, there are three types of verbs:

1. The Action verbs or Normal verbs that are usually physical actions which you can see somebody doing.

2. The second group, called “Non-Continuous Verbs,” is a smaller group. These verbs are usually things you cannot see somebody doing.

3. The third group is mixed verbs. These verbs have more than one meaning. In a way, each meaning is unique. Some meanings behave like “Non-Continuous Verbs,” while other meanings behave like “Normal Verbs.” They are divided into different types according to their functions and forms. In the lesson below we will talk about 12 kinds of verbs in English.

Also Read: 10 Kinds Of Nouns With Definition And Examples

12 Kinds of Verbs in English

1. Transitive Verbs: Transitive verbs are action verbs that have an object to receive that action.

Some verbs like (cheer, sing, visit, trip) can be transitive or intransitive, depending on how they are used in a sentence.

4. Stative Verbs: The verbs that express a state rather than an action. They usually show mental feelings, emotions, state of a person, place, relationships, sense, and measurements.

Some verbs like the verb to be, think, have and see can be both stative verbs and dynamic verbs depending on their meaning.

8. Modal Auxiliary Verbs: Modal verbs are words like can, could, may, might, shall, should, will, would, must, ought to etc. They are used with other verbs to express ideas such as possibility, prediction, speculation, deduction, and necessity. Or modal verbs show different moods and attitudes of the speaker.

9. Helping Verbs/Auxiliary Verbs: Auxiliary (or Helping) verbs are used together with a main verb to show the verb’s tense or to form a negative or question. The most common auxiliary verbs are: have, has, had, do, does, did and to be verbs.

12. Regular and Irregular Verbs:
Regular Verbs: Regular verbs are those verbs whose past tense and past participle (2nd and 3rd forms) are formed by adding “d” or “ed” to the end of the verb.

Irregular Verbs: Irregular verbs are those verbs that do not take ‘ed’ ending for their past tense and past participle (2nd and 3rd forms). Click here to learn more about regular and irregular verbs.

The Most Advanced Use of Gerund And Infinitive

How to Use Be Going To

Well done your are doing great job.You made my concept clear about pronoun and verb.
may Allah helps you.

It is very useful. Keep it up.

It’s very useful than you

You are welcome Ayush.

Woww.. Nice job… You cleared my basic doubts about verbs….. Thank you…

You are welcome Lokesh, hope it is helpful.

Weldone ….it is a great work

Have u any online service to speak english advance level through dialogue
If it possible pls send me material
My email:[email protected]
Thanks a lot ….

Thank you Amanullah.We don’t have yet, we are working on this service.

Some wapsites have five types of verb and you write 12 …. What is the difference

I think what you call perception verbs are still stative verbs.Verbs are the most abused parts of speech.They are the most problematic.Language experts,on a daily basis,try to find new ways to explain what the verb is and does,especially when it is an obligatory element of a sentence.Thank you for sharing.

The best information I have ever studied about grammar. Thanks a lot.

is these types are according to structure and function?

Yes, they are according to the structures.

Learningful activities …thanks a lot … If you can help with some English language lessons activities softwares by emailing .

Hi,
Thank you for appreciation, and working on the software, soon it will be live.

We are grateful to you for your benevolent effort.As an English teacher you are quite helpfu. Allah bless you.
Pleas, explain”conclusive verb and non-conclusive verb.”Thank you.

Hi Aminul
Stative Verbs are known as non-conclusive verbs. You can see the full explanation in the article.