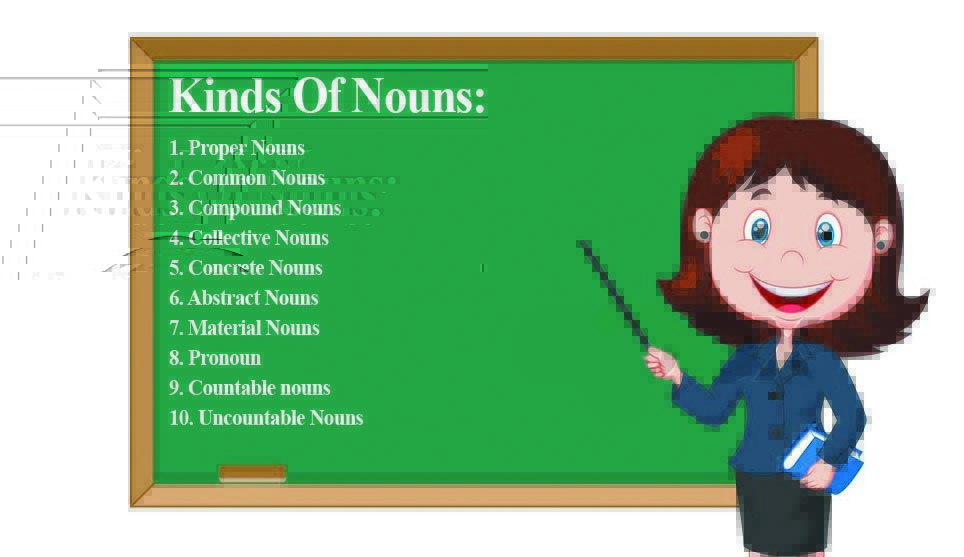 There are various kinds of nouns used to name person, animals, things, and ideas. Here we will take a quick look at 10 kinds of nouns with definitions and examples to help you use them properly in your sentences.

1. Proper Nouns.
Proper Nouns are used to refer to specific persons, places, or things.
A proper noun always starts with a capital letter. These nouns also refer to the names of the days of week and months, and also various names of organization, institution, religion, etc. Which are proper and specific.

3. Compound Nouns
A compound noun is a noun which contains two or more words which join together to make a single noun is called a compound noun.
A compound noun can be written together, Such as “ Football” can be hyphenated such as “ six-pack, Mother-in-law” or separate words such as “ Post office”.

A Collective noun is a noun which refers to a group of people or group of something in a specific manner or unit.

Note: Collective nouns can be either singular or plural, consider the examples below.

6. Abstract Nouns
Abstract nouns are the names of things that you can perceive or recognize with your five senses.

7. Material Nouns
Material nouns refer to material or substance out of which things are made.

8. Pronoun
Personal pronouns are types of nouns that take the place of nouns which are referring to people, places or things are called pronouns.

What are Compound Modifiers in English

Best Software for Improving Your Grammar in English

What is difference bw concrete and abstract noun. Those definitions are same ,how can we recognize or understand well. Their definitions are defining 5 senses. Anybody tell me ?

Thanks to help us…

thanks a lot to help us

i have visited your website first time it is very interesting and informative for me.

I was taught 5 kinds of nouns! after visiting this page I am confused.

This list contains the complete types of nouns in English grammar.

Is pronoun a type of noun