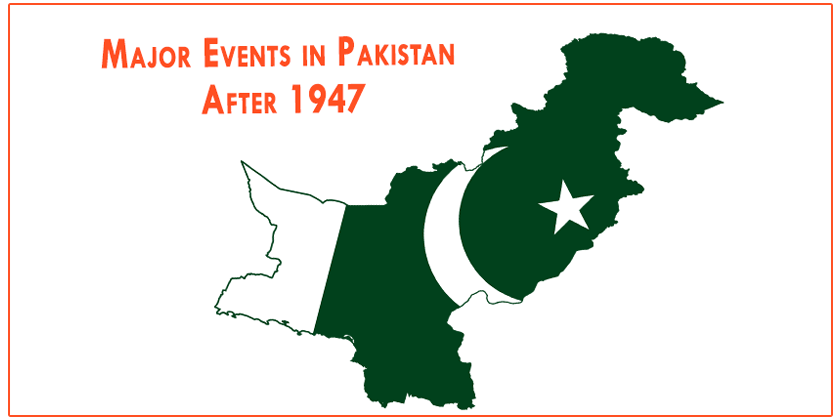 Major Events in Pakistan After 1947

Following is a chronology of major events in Pakistan after 1947.

Major Events in Pakistan After 1947

1947 – Muslim state of East and West Pakistan created out of the partition of India at the end of British rule. Hundreds of thousands die in widespread communal violence, and millions are made homeless.

1948 – First war with India over the disputed territory of Kashmir.

1971 – East Pakistan attempts to secede, leading to civil war. India intervenes in support of East Pakistan which eventually breaks away to become Bangladesh.

1980 – the US pledges military assistance to Pakistan following Soviet intervention in Afghanistan.

Ghulam Ishaq Khan takes over as acting president and is later elected to the post.

1990 – Benazir Bhutto dismissed as prime minister on charges of incompetence and corruption.

1992 – Government launches a campaign to stamp out violence by Urdu-speaking supporters of the Mohajir Quami Movement.

1993 – President Khan and Prime Minister Sharif both resign under pressure from the military. General election brings Benazir Bhutto back to power.

1999 April – Benazir Bhutto and her husband convicted of corruption and given jail sentences. Benazir stays out of the country.

1999 May – Kargil conflict: Pakistan-backed forces clash with the Indian military in the icy heights around Kargil in Indian-held Kashmir. More than 1,000 people are killed on both sides.

2000 December – Nawaz Sharif goes into exile in Saudi Arabia after being pardoned by military authorities.

2001 20 June – Gen Pervez Musharraf names himself president while remaining head of the army. He replaced the figurehead president, Rafiq Tarar, who vacated his position earlier in the day after the parliament that elected him was dissolved.

2001 July – Musharraf meets Indian Prime Minister Atal Behari Vajpayee in the first summit between the two neighbors in more than two years. The meeting ends without a breakthrough or even a joint statement because of differences over Kashmir.

2001 September – Musharraf swings in behind the US in its fight against terrorism and supports attacks on Afghanistan. The US lifts some sanctions imposed after Pakistan’s nuclear tests in 1998 but retains others put in place after Musharraf’s coup.

2001 December – India imposes sanctions against Pakistan, to force it to take action against two Kashmir militant groups blamed for a suicide attack on parliament in New Dehli. Pakistan retaliates with similar sanctions.

2002 April – President Musharraf wins another five years in office in a referendum criticized as unconstitutional and fraught with irregularities.

2002 May – Pakistan test fires three medium-range missiles capable of carrying nuclear warheads, amid rumors of impending conflict with India. President Musharraf says Pakistan does not want war but is ready to respond with full force if attacked.

2002 June – Britain and US maintain mount offensive to avert war.

2002 October – First general election since the 1999 military coup results in a hung parliament.

2002 November – National Assembly elects Mir Zafarullah Jamali – a member of a party close to General Musharraf – to head a coalition government as the first civilian prime minister since the 1999 military coup.

2003 December – Pakistan and India agree to resume direct air links and to allow overflights of each other’s planes from the beginning of 2004, after a two-year ban.

2004 June – Pakistan mounts a military offensive against suspected al-Qaeda militants and their supporters near the Afghan border after attacks on checkpoints, resulting in high casualties.

2004 May – Pakistan readmitted to Commonwealth.

2004 December – President Musharraf says he will stay on as head of the army, having previously promised to relinquish the role.

2005 7 April – Bus services, the first in 60 years, operate between Muzaffarabad in Pakistani-administered Kashmir and Srinagar in Indian-controlled Kashmir.

2005 8 October – An earthquake, with its epicenter in Pakistani-administered Kashmir, kills tens of thousands of people. The city of Muzaffarabad is among the worst-hit areas.

2006 January – Up to 18 people are killed in a US missile strike, apparently targeting senior al-Qaeda figures, in the northwest.

2006 October – Raid on an Islamic seminary in the tribal area of Bajaur bordering Afghanistan kills up to 80 people, sparking anti-government protests. The army says the madrassa was a training camp for militants.

2006 December – Pakistan says it has successfully test-fired a short-range missile capable of carrying a nuclear warhead.

2007 January – Islamabad rejects an assertion by the head of US National Intelligence that al-Qaeda leaders are hiding out in Pakistan.

2007 January-June –  Tension mounts between the government and the radical Red Mosque in Islamabad.

2007 February – Sixty-eight passengers are killed by bomb blasts and a blaze on a train traveling between the Indian capital New Delhi and the Pakistani city of Lahore.

Pakistan and India sign an agreement aimed at reducing the risk of accidental nuclear war.

2007 March-April – Officials say around 250 people have been killed in fighting between South Waziristan tribesmen and foreign militants said to be linked to al-Qaeda.

2007 May – Several killed in Karachi during rival demonstrations over the dismissal of Chief Justice Chaudhry. Subsequent strikes paralyze much of the country.

2007 June – President Musharraf extends media controls to include the internet and mobile phones amid a growing challenge to his rule.

2007 October – Musharraf wins most votes in presidential election. The Supreme Court says no winner can be formally announced until it rules if the general was eligible to stand for election while still army chief.

Nearly 200 people die in fighting with Islamic militants in North Waziristan, a stronghold of pro-Taleban and al-Qaida groups.

Musharraf resigns from Army post and is sworn in for the second term as president.

2008 January – Up to 90 fighters killed in clashes in the tribal region of South Waziristan, near the Afghan border, where militants have been openly challenging the army.

2008 May – The disgraced Pakistani nuclear scientist, Dr. Abdul Qadeer Khan, says allegations he passed on nuclear secrets are false and that he was made a scapegoat.

PPP leader Asif Ali Zardari – Benazir Bhutto’s widower – says he will be the party’s candidate in the presidential election set for 6 September.

Former PM Nawaz Sharif pulls his PML-N out of the coalition government, accusing the PPP of breaking its promise to approve the reinstatement of all judges sacked by former President Pervez Musharraf.

2008 November – The government borrows billions of dollars from the International Monetary Fund to overcome its spiraling debt crisis.

2008 December – India says militants who carried out the Mumbai terrorist attacks in November had Pakistani links and demanded Pakistani action. Islamabad denies any involvement but promises to co-operate with the Indian investigation.

2009 February – Government agrees to implement Sharia law in north-western Swat valley to persuade Islamist militants there to agree to a permanent ceasefire.

After days of protests, the government gives in to opposition demands for reinstatement of Chief Justice Iftikhar Chaudhry and other judges dismissed by former President Pervez Musharraf.

At least 40 people are killed when gunmen storm a police academy in Lahore.

2009 July – The Pakistani and Indian prime ministers pledge to work together to fight terrorism at a meeting in Egypt irrespective of progress on improving broader relations.

2009 August – Pakistan issues a global alert for 13 suspects over November’s attacks in the Indian city of Mumbai.

President Zardari orders the suspension of judges appointed under emergency rule in 2007 after the Supreme Court ruled the emergency declared by former President Musharraf to have been unconstitutional.

2009 August – The leader of Pakistan’s Taliban, Baitullah Mehsud, is killed in US drone attack in South Waziristan.

Suicide bombing in the northwestern city of Peshawar kills 120 people.

2009 December – Supreme Court rules that amnesty decree protecting President Zardari and several of his allies against corruption charges was illegal.

2010 January – Suicide attack on a volleyball match in northwest kills more than 100 people.

2010 April – Parliament approves a package of wide-ranging constitutional reforms. Measures include transferring key powers from the office of president to prime minister.

2010 September – Pakistan temporarily suspends NATO supply route into Afghanistan after series of US drone strikes in the northwest.

2010 October – Ex-military ruler Musharraf apologizes for “negative actions” while in power, launches political party from exile in the UK.

The rise in targetted political killings, bombings in the commercial hub of Karachi.

2010 December – 50 killed in a double suicide attack in Mohmand, near the Afghan border, during a gathering of tribal elders

How The English Language is Used?

Comparing script for independence of Morocco