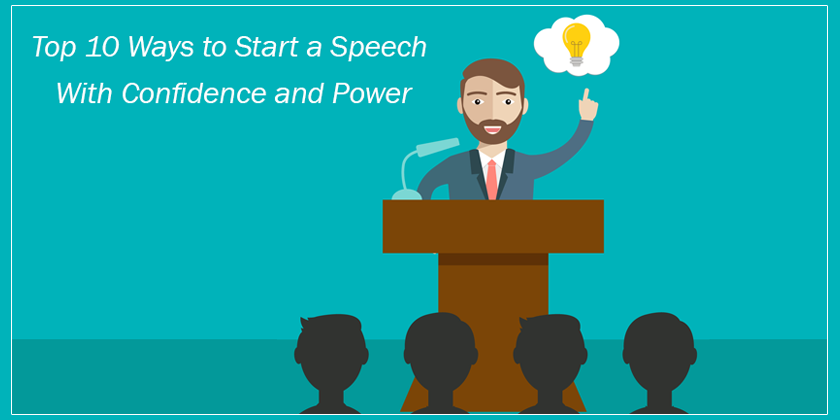 Top 10 Ways to Start a Speech With Confidence and Power

You might have heard people saying,” the first impression is the last impression.” Well, that is the truth because you might never get a second chance to make a better first impression. That means you have to be as good as possible at the first sight or talk.  So if you want to start your speech in a better way then follow the following top 10 ways to start a speech with confidence and power

Top 10 Ways to Start a Speech With Confidence and Power

You should start by thanking your audience for coming and organization for inviting you and also the person who introduced you. According to human nature, it makes them feel proud and happy about your presence and plays a vital role in connecting you to the audience.

You can also put a better impression by saying any positive statement or quote. Such as,” we are really going to have fun in next 20 minutes because I am going to tell you something about today’s topic that you probably have not heard about.” Or a quote regarding that day’s topic which will make audience be more attentive and leave inspired.

3.  Refer to someone well known or something recent

You can begin by making a shocking statement. For instance, according to a recent study, there will be more changes, more opportunities and more facilities in the upcoming years. and 78% of the people will be doing something different within two years.

Bill Gove used to walk to the stage and say,” come here I want to say a secret to you”, and then he would wave them forward as though he about told a secret to all. Then everybody in the room would lean forward to hear the secret that he was about to share. People would all then realize what they were doing and break out into laughter. It was a wonderful way to make the audience be more attentive.

You can also start your speech by saying hello and then asking a question connected to the topic. This way you will make them participate in your talk. As, we all don’t really like to listen but to listen, so it is a good way to start.

You can start your speech by giving a problem to your audience. If It is a problem that everyone has in common, you will rapidly get your audience complete attention. For example,” Pakistan’s engagement in the war against terrorism also affected the promotion of literacy campaign. The militants targeted schools and students; several educational institutions were blown up, teachers and students were killed in Balochistan, KPK, and FATA.  So, we need to address this problem and take action immediately to ensure the quality education in Pakistan.”

One of the best ways to start your speech is to say a story that grabs the audience attention.

From early childhood, people love stories of all kinds. When you start with words such as, “once upon a time…” you will tell audience story is coming. They will rapidly settle down, become quiet and lean forward like a child.

9. By giving them hope

As Gustav Le Bon said, “ the only religion of mankind is, and always has been hoping.”
When you speak effectively, you automatically give them hope. You then need to remember that whatever you speak should be related to your topic and to actions you want people to take.

10. Refer to historical events or people

You can start by referring to a historical person or event to make them listen to you and remember the history. For instance, “For a long time, I have read about warriors such as Karoly Takacs who never gave up on his dream always hopeful and ready to face ever kind of circumstances with courage. Such warriors deserve a stand.”

I hope these top 10 ways to start a speech with confidence and power will help you to start your speech in a better way and please feel free to write your feedback in the comment box below.

How to Add Often-Used Tools to the Ribbon on PowerPoint

Anchoring Script for Investiture Ceremony in School, College or University