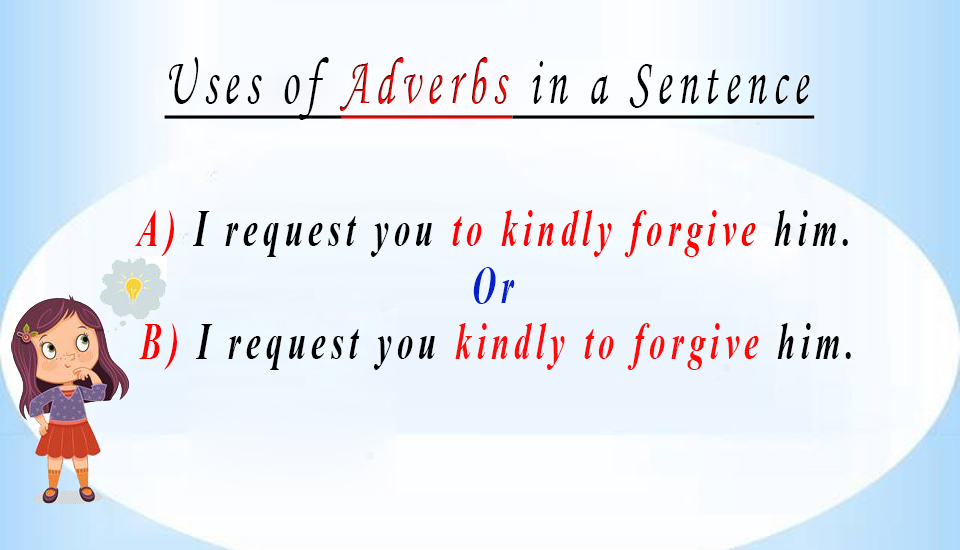 Uses of Adverbs in a Sentence

An adverb as like a verb can be a significant part of a sentence. Adverbs play a vital rule in a sentence, they are used to change or qualify the meaning of an adjective, a verb, a clause or another adverb in a sentence. In the lesson below we will look at the uses of adverbs in a sentence.

Uses of Adverbs in a Sentence

What is an Adverb?
An adverb adds something to the meaning of adjective, verb and any other adverb but not a noun or pronoun.

Sometimes an adverb modifies an entire assertive sentence. In such cases, the adverb must stand first in the sentence.

The position of adverb in a sentence is governed by the following considerations:

1. An adverb usually comes before an adjective or another adverb.

(“Enough” is generally placed after the word it modifies).

2. An adverb is usually placed after the verb it modifies. But, for the sake of emphasis, it may also be placed before that verb.

Similarly, adverb of time (always, ever, often, seldom, and sometime) and number (first, one, ten etc.) are usually placed before the verb they modify (except to be verbs).

3. An adverb comes either before or after the object, but not at all between the transitive verb and its object.

4. An adverb may come between an incomplete verb and its complement.

5. An adverb comes either before or after the object, but not between the transitive verb and its object.

6. An adverb is placed first in a sentence where it qualifies the whole sentence, and secondly it emphasizes, or for exclamation.

Some important points about the uses of adverbs

1. Some adverbs, unless placed immediately before the words they modify, change the sense of the sentence.

2. Some adverbs have two forms with different meanings and therefore, should be used with great care.

3. An adverb is not placed between an infinitive and its sign “to”.

1. The simple adverbs: They qualify the meanings of the words to which they are attached.

a. Adverb of Time: (after, now, again, already, ago, later etc.)
b. Adverb of place: (above, around, aside, everywhere etc.)
c. Adverb of degree/quantity: (almost, also, enough, little, much, too, very etc.)
d. Adverb of manner/quality/state: (so, certainly, slowly, well, badly, fast etc.)
e. Adverb of number: (firstly, never, once, often, twice etc.)
f. Adverb of cause: (how, why, what)
g. Adverb of comparison: (so, as, than)

2. The relative adverbs: They not only qualify any part of speech except a noun or a pronoun but also connect sentences. (As, how, then, when, where, while, why, whereas, and whereby)

3. The interrogative adverbs: They are the same in form as the relative pronouns, but they are used in asking questions (Where, when, why, how far and how long)

In this lesson you learned about the uses of adverbs in a sentence. you can click on the link to learn about the comparisons of adverbs. Hope you will uses the adverbs correctly in your sentences so on. If you have any question please feel free to comment the comment box below.

Usages of So in English Grammar