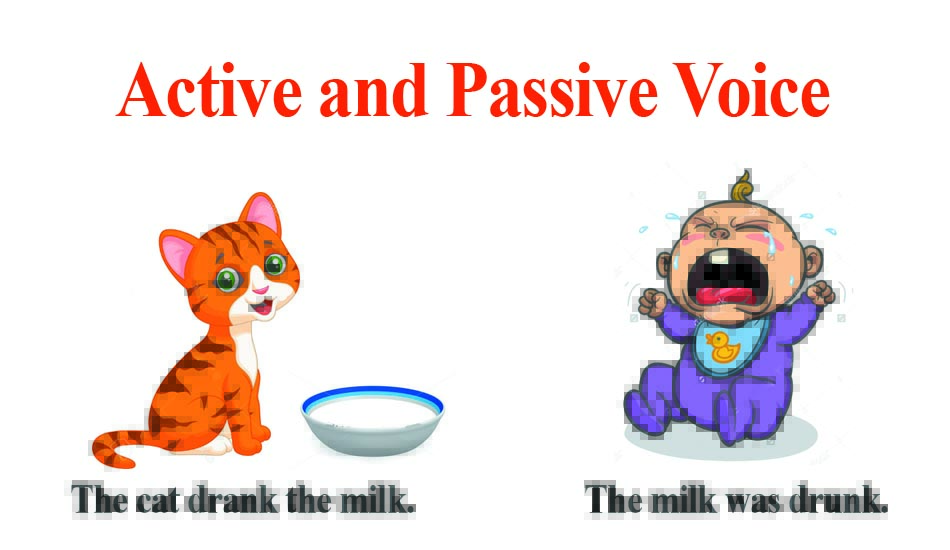 Note: If you want to know how to change active voice into passive voice, you must have mastery over 12 tenses in English, if you have problem in 12 tenses in , we recommend you to click here and review the 12 tenses.

Voice:  Voice is the term used to describe whether a verb is active or passive in active and passive voice.

Active Voice: A sentence which begins with the performer of the action (subject), then the verb,then the object or person that the action is performed on. This is called an active sentence.

Passive Voice: A sentence which begins with the object or person that the action is performed on is called passive sentence.

2. When it is obvious to the listener or reader who the subject is because it is the person who usually does it.

3. When we give more importance to the object of the sentences rather than the subject, we use passive voice.

How to Change active sentence into passive sentence? Follow the steps below.
1. Put the object of the verb at the beginning of your sentence.
2. Conjugate the verb’to be’ (using different form of to be verb) in the same tense as the active sentence.
3. Put the main verb in the Past Participle form.

Note 1: If you want to mention the subject in a passive sentence, use ‘by’, though its optional.

Note 2: If the active sentence begins with ‘no-one’ or ‘nobody’ the passive sentence will be negative.

Note 3: If there is a preposition between the verb and the object, the preposition will remain after the verb

The Passive Voice of Other Structures

Have to/ Used to / Gerund

Passive Voice of Modal Verbs (can, may, should, might etc)

The Active and Passive Voice of WH. Questions:

Verbs which can’t be used in the passive
Most verbs can be changed from the active to the passive. If the verb can be followed by a direct object it can be made passive.

Some verbs which can be used in the active are: occur, rise, happen arise, fall,  exist, contain (of), depend (on), result (from) and lack.

Verbs which are always passive
Some verbs are used almost exclusively in the passive voice:

Note the position of the adverb of manner. (well) in the passive voice.

In the Passive Voice, the following verbs to believe, to consider, to say, to think and to suppose must be built with an infinitive clause.

Would you like to know more about active and passive voice? Check out the useful articles below:

Most Used Phrasal Verbs In English

The active and passive voice of wh. Question 3rd part passive side vase spelling is wrong it is written Base instead of vase

There was a typing mistake and it has been rectified.

Jhon washes his clothes…Change in passive

His clothes are washed.

How is it correct? Children teasing Muna are hated. please, explain.

Children teasing Muna are hated.
Here we give more importance to the object (Children) of the sentences rather than the subject. That’s why the sentence in passive voice.

Change this one plz , clean the plate

Let the plate be cleaned

Thank you that was really useful

You are welcome Fazi. And thanks for the appreciation.