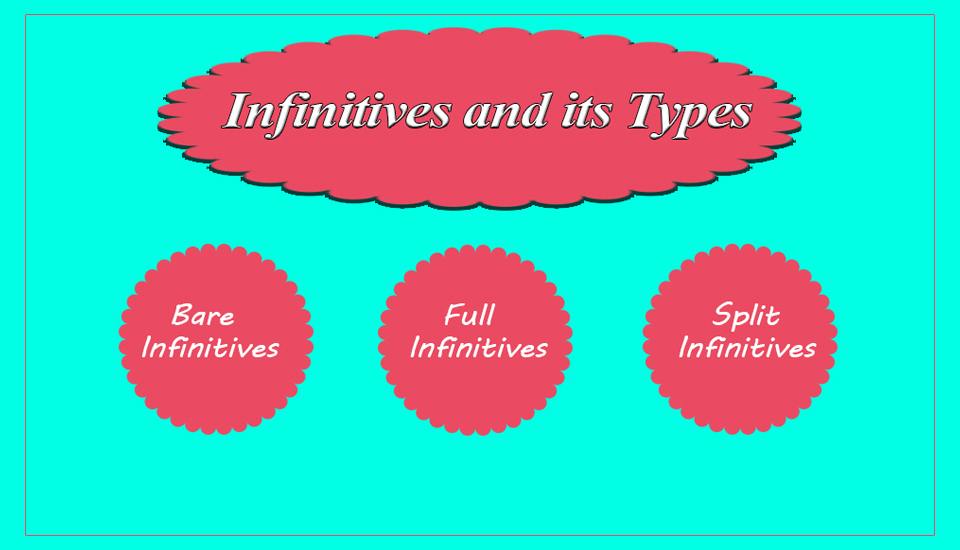 The Infinitive is the basic from of the verb. One of the prominent difficulties of the English language is to know whether to use gerund (i.e. seeing) or an infinitive (i.e. to see). If you want to speak correct and natural English you must know about the usages of gerunds and infinitives. In the following lesson we will look at infinitives and its types

In English there are certain verbs like (let, have, make, hear, and watch) after which we use bare infinitive.

The infinitive is used without ‘to’ after modal auxiliaries: will, would, shall, should, can, could, may, might, must, need, dare etc.

We don’t use after: rather, better and had better the word to with an infinitive.

Uses of Full Infinitives:
Full infinitives can function as a noun, an adjective or an adverb in a sentence.

1: The perfect Infinitive (“to have + 3rd of the verb” mostly found in conditional type 3).

2: The perfect Continuous Infinitive (“to have been + verb+ ing” is used to express a continuing but now completed action).

3: The continuous Infinitive (“to be + verb + ing” is used to express a continuing action after a verb or auxiliary which must be followed by the infinitive).

4: The passive Infinitive (“to be + 3rd of the verb” is used in some constructions using the passive voice. It is particularly common after auxiliary verbs (may, should, could, etc.).

When you place an adverb or adverbial phrase between the ‘to’ and the verb and split the infinitive from ‘to’ is called split infinitive.
To carefully walk, to boldly go, to seriously play etc.

Using split is condemned in most cases; however, they are common in writing of all kinds. But remember when you are in doubt; avoid using split infinitives in your sentences.

How to Write a Friendly Letter in English