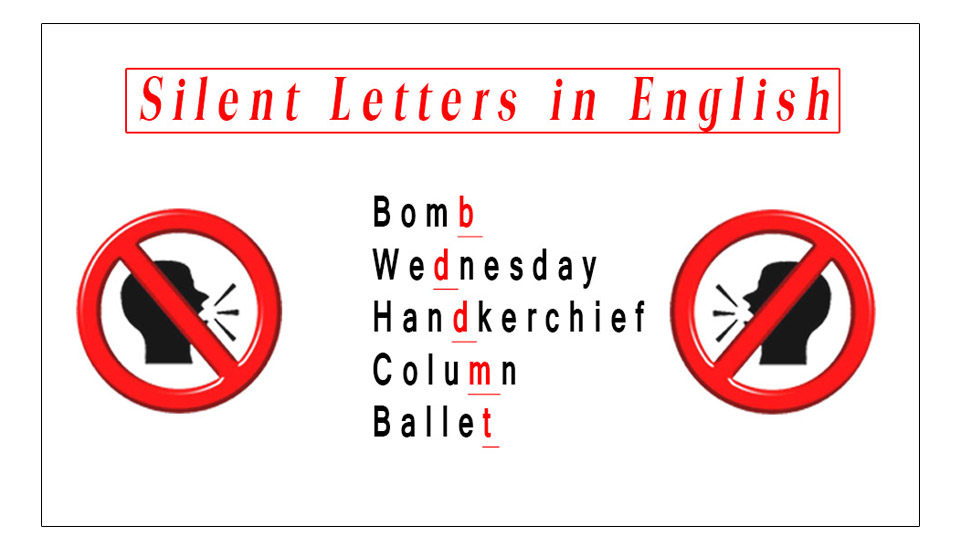 Learning English as a second language is not an easy task. For most of the people its the pronunciation issue that causes most of the problems. People face very common pronunciation issues when learning English as a second language. This can be one of the reasons they can’t comprehend when listening to native speakers because they are not familiar with the accurate pronunciation of the words. One prominent problem can be silent letters in English. In this lesson, we will talk about silent letters in English to help you pronounce the words correctly.

There are some rules that explain which letters are supposed to be silent, before and after certain letters (the only issue about this is that, like all English rules – there are usually some exceptions!). once you start practicing these rules and using new vocabulary that you learn, it will become easier to remember silent letters in English.

Silent B
Rule 1: The letter B is usually not pronounced after M at the end of a word.
• Comb, bomb, thumb, climb, tomb, crumb, lamb

Rule 2: B is usually not pronounced before the letter T.
• Doubt, doubtful, subtle, debt.

Silent C
Rule 1: The letter C is usually not pronounced in the combination of SC.
• Scissors, ascent, fascinate, muscle.

Silent D
Rule 1: The letter D is silent when it appears before the letters N and G.
• Wednesday, cadge, Pledge, grudge.

Silent E
Rule 1: If the letter E comes at the ends of words, it is generally not pronounced.
• Fore, table, before, write, give, hide.

Rule 2: If E occurs before the letter D in the second and third forms of the verbs, E may sometimes not be pronounced.
• Bored, fixed, smuggled, begged.

Silent GH
Rule 1: GH is not pronounced when it comes after a vowel in a word.
• High, light, thought, through alight.

Rules 2: Exceptions: GH is pronounced separately in compound words (As you can see in the following words that exceptions are generally compound words).
• Doghouse, bighead, foghorn.

Rule 3: Except examples from rule 1, GH is sometimes pronounced like F, consider the words below.
• Draught, cough, laugh, tough.

Silent H
Rule 1: The letter H is usually silent when it appears after W.
• Why, what, when, weather, where.

Rule 2: Sometimes the letter H is not silent after W, consider the words below.
• Whose, whosoever, who, whoever, whole.

Rule 3: His mute at the beginning of many words (remember to use the article “an” with unvoiced H).
• Hour, honest, honor, heir.

Rule 4: Exceptions: Most of the words beginning with H are not silent (remember to use the article “a” with voiced H)
• History, Historical, Hair, Happy.

Silent K
Rule: The letter K is always silent when it precedes the letter N in a word.
• Know, knock, knife, knight, knowledge.

Silent L
Rule: The letter L is usually not pronounced after the vowels: A, O, and U.
• Calf, half, palm, would, should, could, folk, yolk.

Silent N
Rule: The letter N is not pronounced when it comes after M at the end of a word.
• Column, damn, solemn, autumn.

Silent P
Rule: The letter P is not pronounced at the beginning of many words using the combinations PS, PT, and PN.
• Psalm, psephology, pterodactyl, pneumonia, pneumatic.

Silent S
Rule: The letter S is not pronounced before L in the following words:
• Aisle, island, isle, islet.

Silent U
Rule: The letter U is not pronounced when it comes after G and before a vowel in a word.
• Guide, guest, guard, guess, guano.

Silent W
Rule 1: The letter W is not pronounced at the beginning of a word when it is before the letter R.
• Write, wrest, wrong, wrack, wrap.

Rule 2: W is silent in the following words:
• Who, whose, whole, whom, whose, whoever, answer, sword, two.

IMPORTANT: Pronunciation matters a lot. Despite, having good grammar accuracy and vocabulary power if your pronunciation is imprecise or wrong your speaking will be ineffective. Below I have listed the rules for common miss pronounced words or letters that will help you to avoid common errors in pronunciation. Just click on the links.

How to write a formal letter?

Transitional Words or Phrases In English

Welcome back with great article.

I see a lot of interesting posts here. Your content can go viral easily, you need some initial traffic only.
How to get initial traffic? Search for: masitsu’s viral method

Thank you Rodney dear for your precious feedback. I do my best to help people learn better English by publishing erudite posts.

Hi, i noticed that your page is a bit slow, it took around 5sec.

to load this article. Do you know that page speed
is major ranking factor for google now? If you speed up your website loading time you can rank higher
and get more targeted traffic.

Hello dear Cierra,
Recently we have changed the web hosting. So on our website will be loaded faster and better.

Thanks for the silent letters rules and more useful articles for English learners.

While they can be in the vocabulary of English-speaking people, some words listed as English words are actually French words (e.g. ballet, rapport). I’m not an expert, but I do know that non-English words are subject to a different set of rules. For example, no 2+ letter English word ever ends in ‘i’ – people can say, “What about ‘sushi’?”, but that isn’t an English word.

there are legions of article related to this article but you one is really awesome.

A to z words in different rules English!

[subtitle] why {B} is not pronounced before {T}
PLZ guide?

thank you for your article it very helps me to make my Skripsi. but may I ask you where you get the Rules of pronunciation, I mean can you mention the author, please?

Hiiii, I am mohd rihan Rao