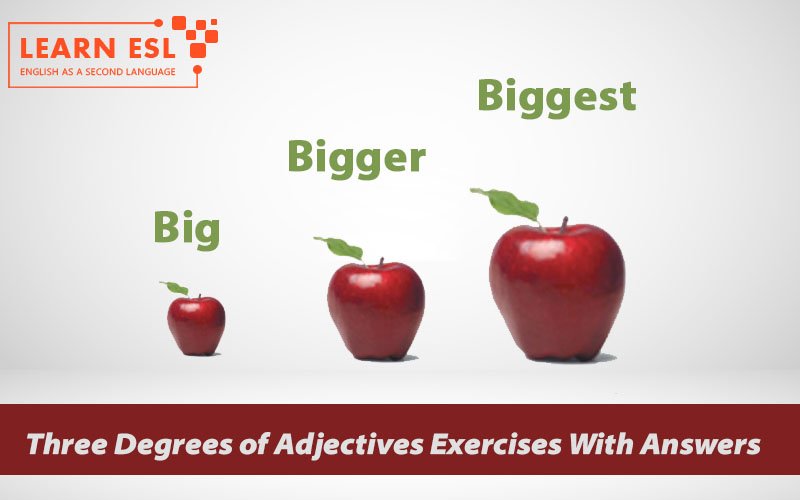 The positive degree of an adjective makes no comparison and it just modifies or gives more information about a noun.

2. The Comparative Degree of Adjective

Add “r or er” to the end of a one-syllable adjective.
Use this formula:
Noun/subject pronoun + be (not) + adjective + r/er + than + noun/ object pronoun

Make sentences with the comparative form of these adjectives.

3. The Superlative Degree of Adjective

Add est to the end of one syllable adjectives.
Use this formula:
Noun/pronoun + be + the + adjective + est + ROTS

Change y to i and add est to the end of two syllable adjectives ending with y.

Make sentences with the superlative degree of these adjectives.

Use the most or the least before two or more than two syllable adjectives if they do not end with y.
Use this structure:
Noun/pronoun + be + the most/the least + adjective + ROTS

Fill in the blanks with the correct form of adjectives in parentheses.

Choose the best options from what you learned about the degrees of adjective so far.

Determine which form of the adjective best completes each of the following sentences.

When you attempted all the exercises then compare your answers with the correct answers given, find out your mistakes and rectify them. Also, read the following related articles. Moreover, ask your questions about the article using the comment section below.

Good exercises for students to practice degrees of adjectives.

Thanks, Shubh for the feedback.