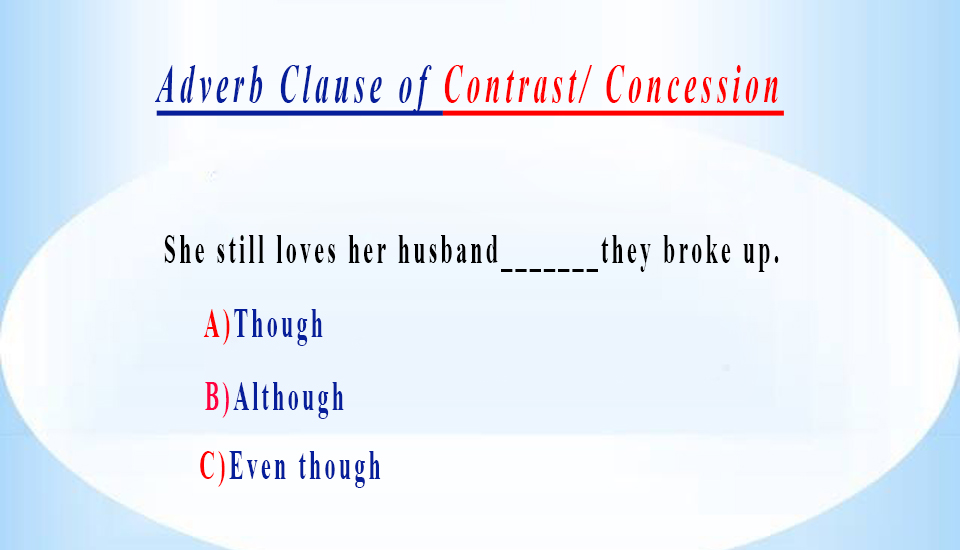 These clauses are used to make two statements, one of which contrast with the other or make it seem surprising. They are introduced by the subordinating conjunctions like “although, though, even though, despite, in spite of, whereas, while, even if and however.

Though, Although and Even though

Though and although mean the same, we use them to contrast two opposite meanings (positive and negative) and it always gives unexpected results, we can use though in any part of the sentence but although can’t be used in the end of a sentence. When the though/although clause comes before the main clause, we usually put a comma at the end of the clause. When the main clause comes first, we don’t need to use a comma:

Even though is a slightly stronger form of although.

Despite and in spite of

Despite and in spite of are prepositions which are used with phrase to show contrast and after them we use a noun or a pronoun.

We use whereas or while to contrast two opposite facts. We don’t matter negative or positive meaning.

Even if is used to emphasize that, although something may happen or may be true, it will not change a situation.
I would not tell you even if I knew.
Even if she survives, she’ll never fully recover.

However is used to introduce a statement that contrasts with or seems to contradict something that has been said previously.

This helped me more than what i learnt in the class.

Thank you dear. We do our best to provide more usefil articles.

really useful; i have never heard of the construction even though I went to Cambridge.

Sir first you write 2 separate sentences after you combine the sentences with though, although,eventhogh,inspire of…….. Please please give some more examples thank you

Hi,
Please check out more examples and sentences in the given link below: