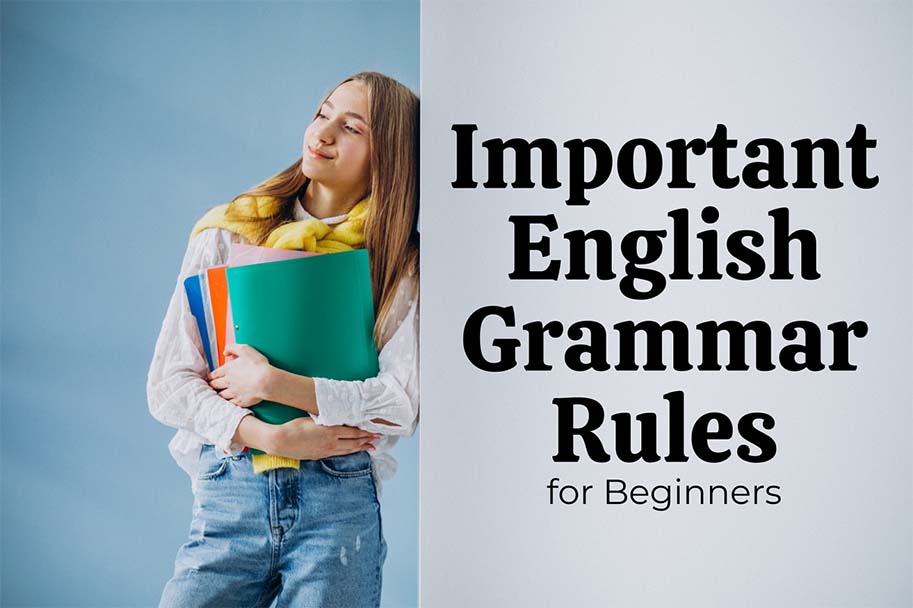 While learning a new language, students find the grammar rules the toughest to learn. Because there are countless rules that make up a language. Similarly, from English alphabets to the tenses and to the punctuations, students need to learn everything to be able to correctly speak, read, and write in English. Thus, let’s have a look at the most important English grammar rules for beginners.

Like most languages, English too can be difficult to learn. However, with the correct knowledge of English grammar rules, one can easily not learn English but also master it in no time. Thus, check out the important English grammar rules for beginners and let us know in the comments below if you need any help.

The subject of the sentence is a vital part of the sentence. It is either the person who is doing something or an object or place which is being described. For instance,

However, not every sentence needs a subject. There are sentences that require no subject, yet they give perfect meaning on their own. For instance,

In English, the most common sentence is the active voice. It is a voice in which the subject is the doer of an action. So, the subject is always followed by an action called the verb. Next, you can add an object if you need one. The formula of an active voice looks like S+V+O (subject+verb+object). For instance,

5. Ideas are linked with Conjunctions

When you want to link two sentences, ideas, or words, you can use conjunctions. For instance,

Students usually adjectives are adverbs interchangeably which is syntactically wrong. An adjective describes or modifies a noun or a pronoun and they usually come before the noun or pronoun they describe. Whereas, an adverb comes after a verb and modifies a very, an adjective, or an adverb.

10 Kinds of Adjective in English

In the English language, homophones are one of the most confusing lessons for new learners. Homophones are words that sound the same but they have different meanings. Their spelling may also vary. Therefore, while writing or speaking, you need to pay extra attention to choose the correct words. Similarly, while reading or listening, you can understand the meaning of the words from the context. Common examples of homophones are given below.

There are twelve tenses in English. Each of them has its distinct usages and rules. That is why learning and practicing each of them is crucial for improving all of your four skills. For instance, we use simple present tense for habitual actions like “Mary walks her dog every evening”. Present Continuous tense is used for actions that are going on at the time of speaking. For example, “You are learning important English grammar rules for beginners”.

In English, a negative concept can be expressed in two different ways. For instance:

In the above examples, “nobody” and anybody” both have similar meanings. Among these, you can use nobody with a positive word but anybody has always used a negative word.

You may also want to read more:

Quantifiers: A lot of, Lots of, Plenty of, Few, A Few, Little, A little